As we loaded the bike early in the morning the kindly apartment owner picked us satsumas from a tree in his garden. Leaving his cigarette in the ash tray for a while and his strong cup of coffee on the table that sat on the veranda shaded by a large vine growing over a steel frame. There was a stench of liquor on his breath. He waved us on our way as we crept out as the town started to wake up. 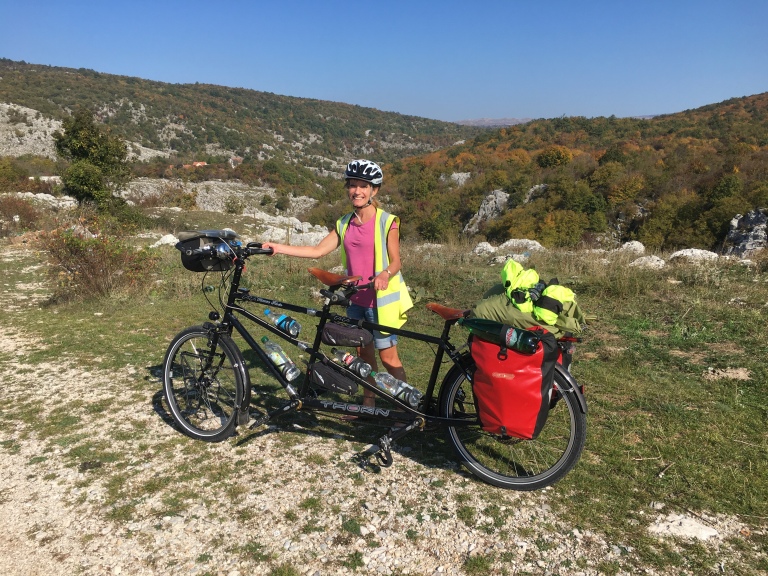 Soon we were climbing up into the limestone mountains as we headed away from the turquoise sea. We followed along the rim of the small steep sided Cetina gorge which cut down beneath the blanket of vibrant autumn coloured oak tree forests.

Once across the border into Bosnia, at Gorica, where we were greeted by very friendly guards,
we pushed onto Mostar arriving just before dark. As we descended from the pass we were greeted by the sound of mosques calling people to pray, and minarets dotted the skyline , standing alongside tall church spires, competing for prominence in the fading light. We had arrived in a different world that felt different to Europe, far more eastern.

Mostar sits astride a fast moving river that has cut deep into the rock. The two sides of the city are connected by the iconic graceful stone bridge spanning high above the river. The bridge is fully rebuilt and restored since its destruction in the Balkan war. It is now hoped it will be a symbol of togetherness and harmony.

We had a long haul out of Mostar through dry hot limestone scenery, passing a stone castle perched high on the mountain side. We soon realised we didn’t have enough food and water in this empty landscape. Luckily standing on its own in the middle of nowhere, miraculously there was a small cafe where we had , Turkish coffee, tomatoes and homemade goats cheese from the owners three goats. 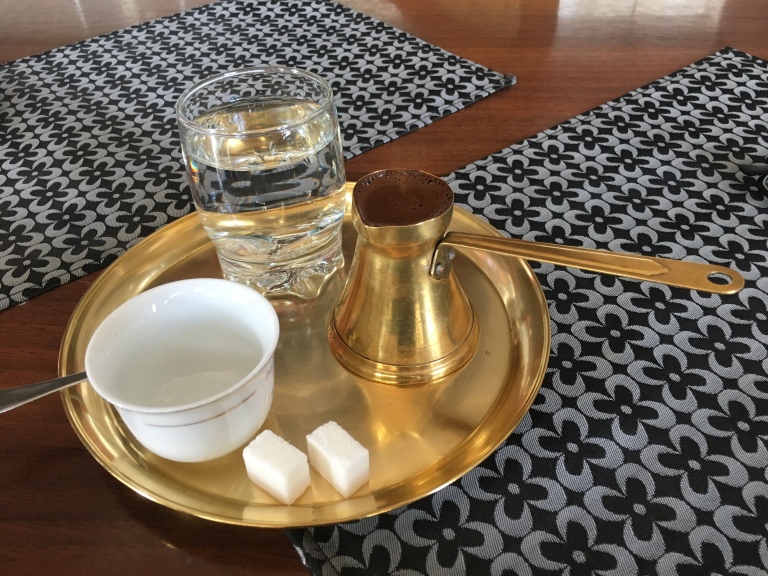 At the top the landscape was empty and rugged, and this gradually gave way to a tree covered valley displaying wonderful
Autumn foliage.
People in villages called out and waved, large shepherds dogs barked and alarmingly greeted us.

Characterful ladies were sitting by the roadside knitting. The garments hung on makeshift lines for sale. 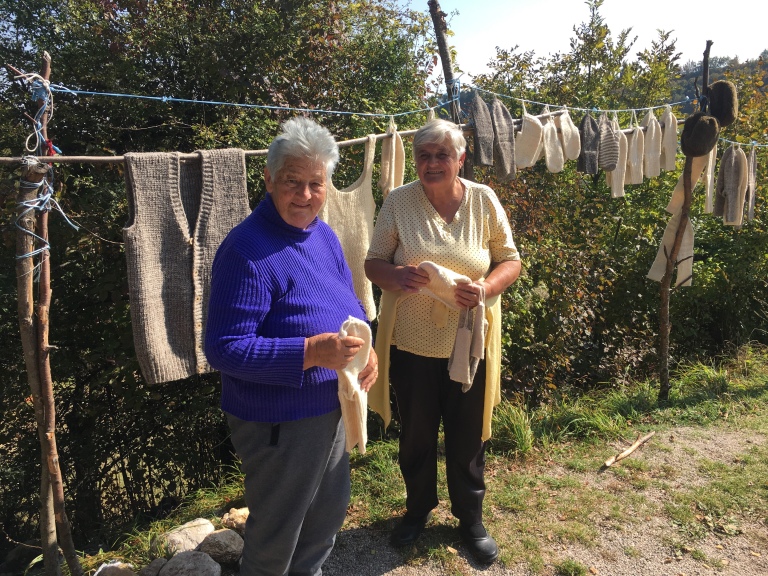 After a night at Gacko, not so far from the border with montenegro we headed north through beautiful Bosnian countryside to the Tara river which we would need to follow to the border crossing point. 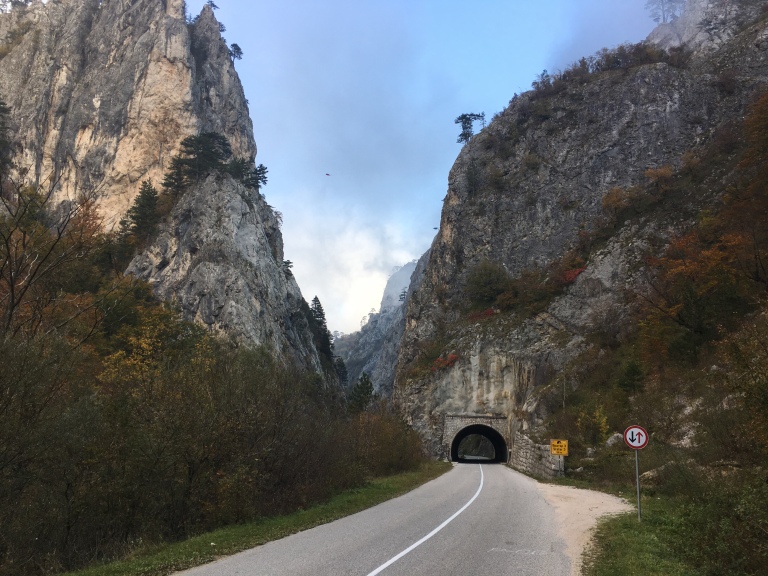 The mountain scale became huge and towering. Limestone cliffs rose above us. The road twisted, turned and darted through many long tunnels, some a couple of kilometres, which were eerie on the bike especially when other vehicles approached. The noise reverberated through the tunnel from a long way off and became louder and louder. Surely it must be nearly upon us, but the deafening racket carried on increasing until eventually the menace passed and near silence and darkness returned.

We had some great encounters with some young Bosnians when we stopped to buy some jam. People are so friendly and it’s great to hear about their lives. This part of Europe is so forgotten by Northern European countries.

We stayed the night at a lovely cabin by the Tara river. 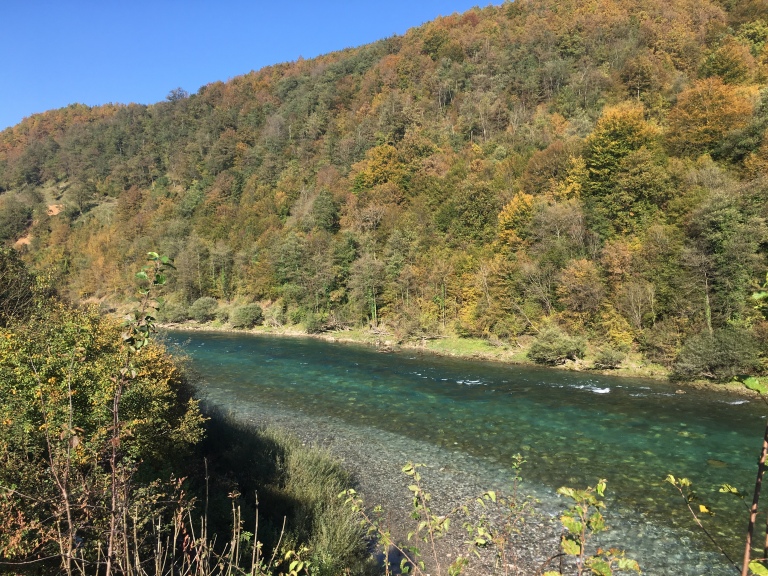 We followed the deep blue mountain river upstream to Montenegro. The valley again narrowed and towering walls of rock were on either side. We had entered the Piva gorge. The road threaded through numerous rough cut rocky tunnels as it clung to the steep valley side. The river below rumbling over the rocks.The scenery was stunning, and vast, sheer limestone interspersed with golden and red autumn foliage trees. 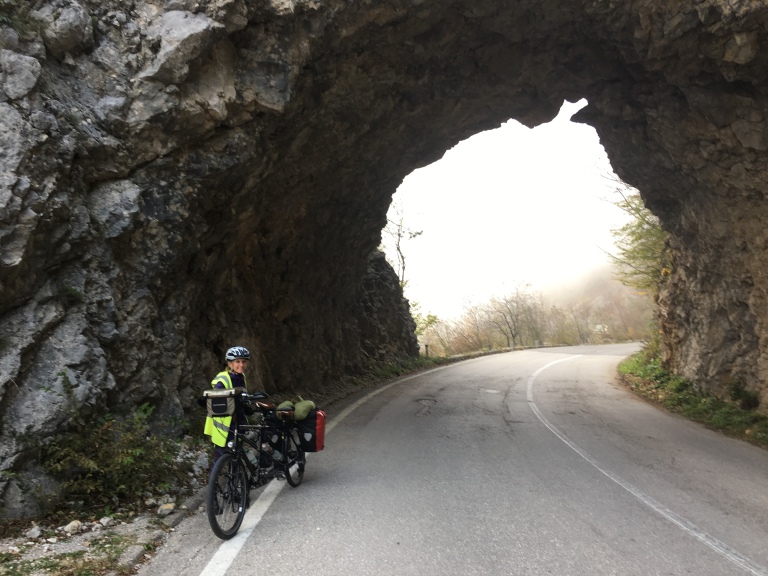 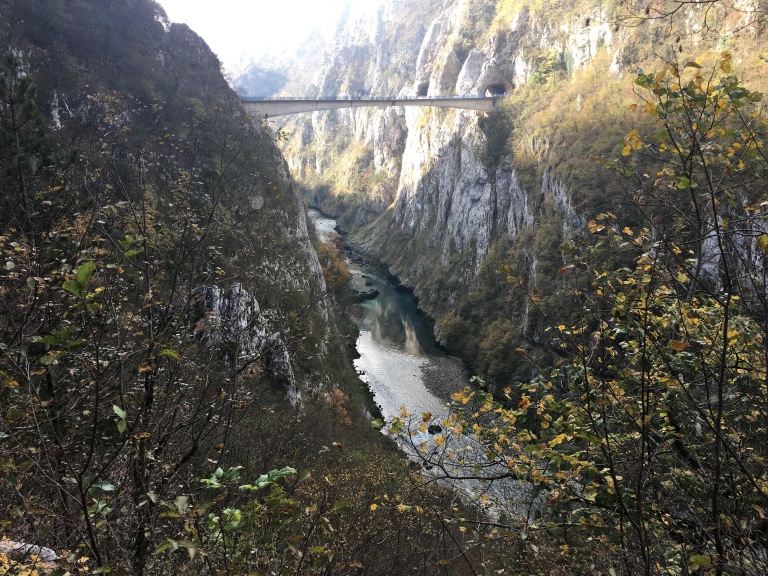 Further up stream a dam for electricity flooded the valley bringing silence, just the gentle breeze across the deep blue water. We wound our way along the gorge. There was tunnel after tunnel, some long and dark. 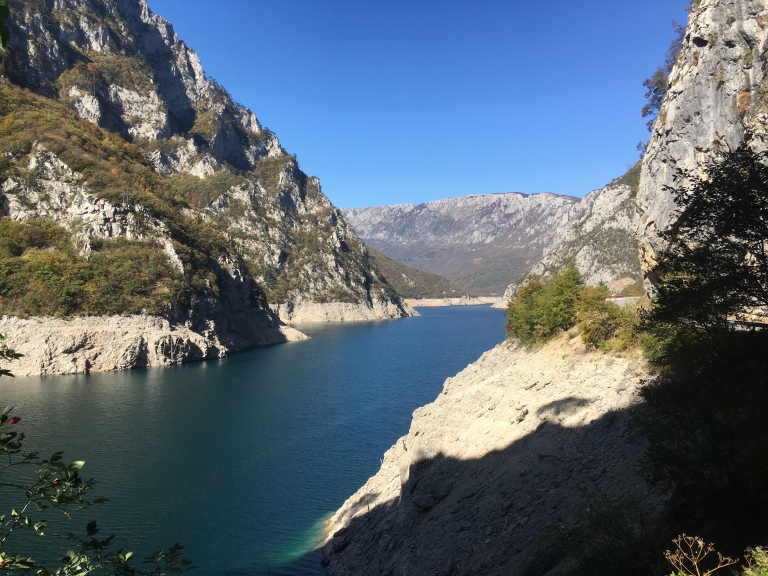 Eventually we reached the road to climb out of the gorge and up and over the massive Durmitor mountains, a climb of 1200m. Immediately the road dived into a tunnel that wound its way round the first switchback. The road was very steep and snaked its way up the sheer mountain side passing again through lots of tunnels, many going round bends. We climbed high above the lake and eventually reached less steep rolling landscape on the top.

We stopped the night high up in the Durmitor at a lone village with a small cafe bar that had rooms. There were long tables made from tree trunks and logs, where we had goulash for supper. 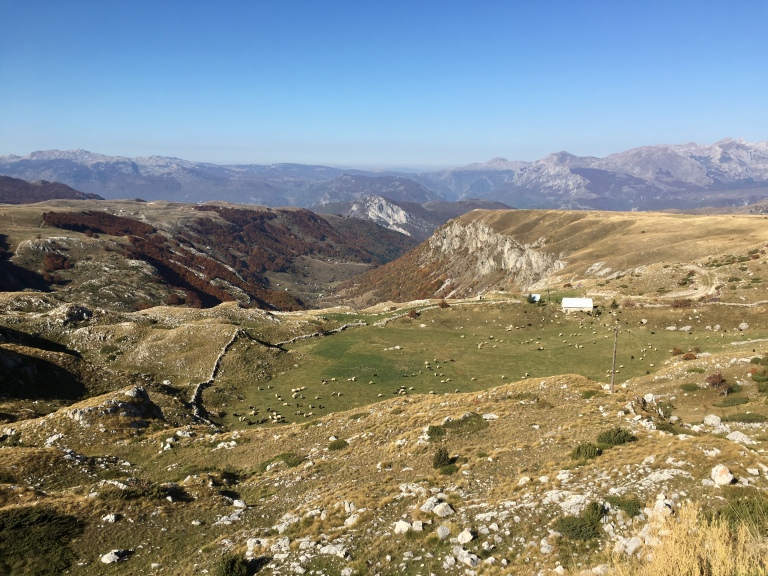 It was a frosty start and after a hearty breakfast of smoked meats, feta cheese and egg we cycled through stunning rolling rock strewn mountainous scenery

Sheep were herded with dogs and no Shepherd, taking the flock from one pasture to water and onto another. The dog guided them from the centre of the flock and it looked like sheep and dog had been doing the same route for all of time.

On the edge of the Durmitors we found a small cafe in a timber cabin to have lunch of a hearty cheese and ham sandwich washed down with domestic tea. The owner and his friend sat near the door smoking and drinking beer. A dog sat at the table next to us looking yearningly. 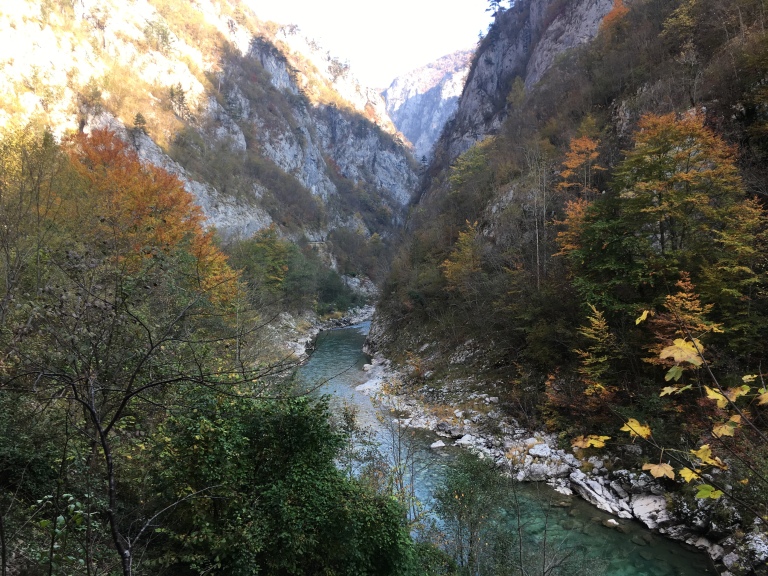 The next day we rejoined the Tara river, now much further up stream and our route dropped right down into the gorge. The road again snaked its way through impressive scenery, limestone and vibrant autumn foliage everywhere. 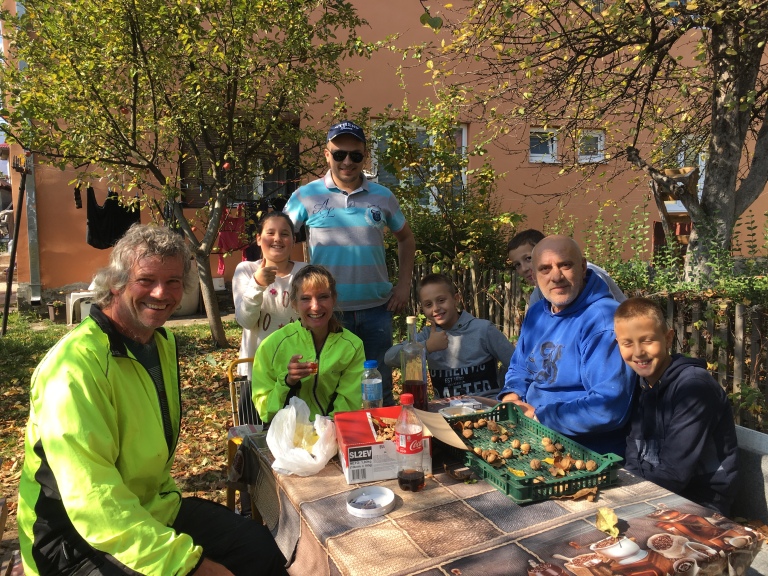 At lunch we found a shop to purchase a few things that we ate sitting on the ground outside. A kindly person invited us to sit with his family in his garden at a table under the shade of some apple trees. He plied us with home grown walnuts and shots of his home brew brandy. We still had a long way to go and despite our new friends reassurance his brandy would make us strong it was definitely time to move on. He filled our pockets with more walnuts and decanted half a litre of brandy into an old Coca Cola bottle and sent us on our way. 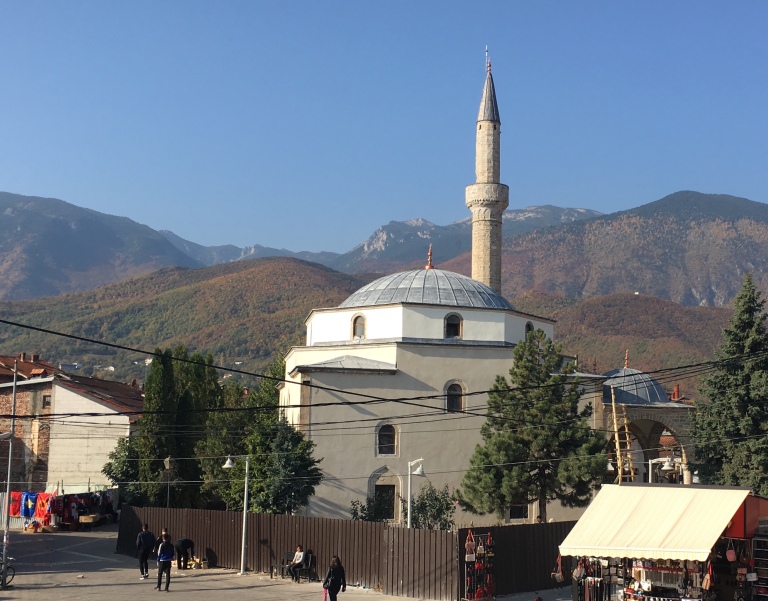 The next day and after two hard 800 metre climbs through forested mountains and over the pass we descended into Kosovo. A very different feel to the place, much more Turkish and near east about the place. The bread, the coffee, kebabs cooked over large charcoal grills, traditional baked stew in earthenware pots, mosques, stone fortified houses, and bazaars. Smell of spice and incense.

A striking feature of this Balkan journey is when you cross geographical divides you enter new worlds, different cultures and religions, contrasting ethnicities, making it a fascinating and diverse land.
There were Italian influences too, a lot of the peace keepers were Italian, which showed in the food and language.

Kosovo takes cafe culture to the extreme, so many tables out the front of cafes, one after another, people sitting, chatting, smoking, drinking coffee, or just watching the day go by.

We cycled to a couple of fine monasteries set to a backdrop of mountains. They were heavily guarded by international forces, and razor wire topped the old stone perimeter wall. We also cycled through villages with stone fortified houses called kulu houses. Now restored these were used in the past in times of conflict to protect families and their food.

We stopped for a chat with two interesting guys who were cutting wood for winter fuel. Sat on a couple of logs we drank coffee and talked about the difficulties they faced. Very low wages, almost impossible to travel outside the former Yugoslavia, the horror and upheavals of war, and the divided society it has produced. The good days of Tito and Yugoslavia came up time and time again. Then education, health and housing was free. Dougy, one of the guys chopping wood who was a radio DJ, earning a typical wage of 500 euros a month, said his parents had six children all educated and most went to university. He said he would struggle to send either of his children to University, and he only has a place to live because he inherited his parents flat which they bought very cheaply when Yugoslavia broke up. Then there is the corruption and mafia style family involved in everything. To be honest is difficult they said and you need the right connections to get on. A long chat with Ray the Albanian rapper, an extremely well read young man, covered similar stories. There is a very strong Albanian heritage and pride with these people. They are generous too. A meal out or a few drinks always includes many free drinks and shots of local home brew brandy.

The horrendous war always comes up in conversation. Half the population moved away, and all told us of the destruction they had to live through and return to. Cycling through one village we saw a wrecked mini bus with bullet holes through the side, rusting and covered in flowers. It sat next to a stone monument with many names on it in the village central square. A stop for coffee and a chat with a local man who spoke no English, revealed the horrific story. The anger and upset in his face as he explained with odd words and signs, taking time to smoke and sip his coffee as he told the story of what happened more than 20 years ago. He was still bitter and very effected by the event. Thirty children were killed by the Serbian forces he explained.

Leaving the skyline of minarets of Prizren we climbed through forested mountains upto the quiet Macedonian border. A stamp in our passport, and “thank you for visiting Kosovo”from the border guard and we had arrived in Macedonia.

We stayed our first night in a village house with a friendly guy called Dragisa. He made us very welcome, and cooked us sausage and bean stew for supper. After a nice breakfast he gave us a tour of his vegetable garden, livestock and most importantly his brandy still. 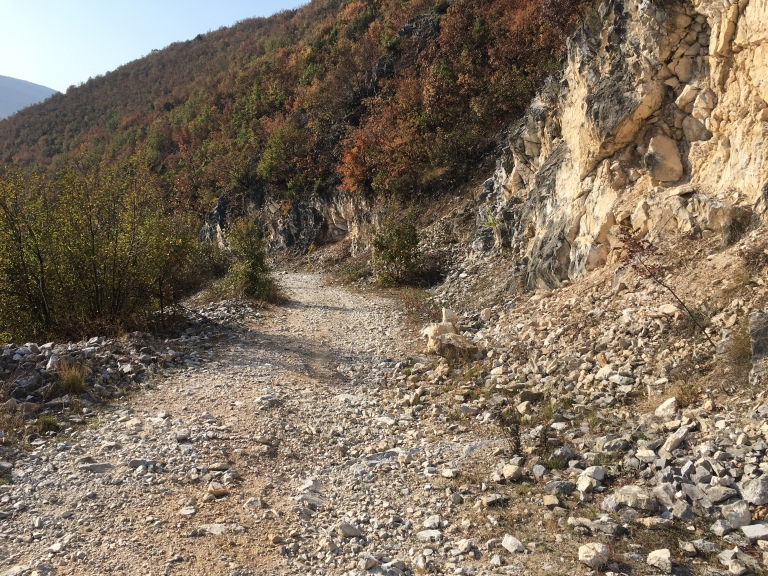 It was a rough road down the valley to Skopje through beautiful forests. We had reached our destination on this leg of our journey to Istanbul and were met by Vercher, the own of a small hotel in Skopje. A young inspiring entrepreneur who generously looked after us so well, and even with her friend took us to the airport at three o’clock in the morning.

Dragisa also drove us back from Skopje to his village so we could climb mount Ljuboten on the Kosovo border. Such kindness from both these lovely Macedonian people that we will never forget. All through this trip we have met so many friendly people.