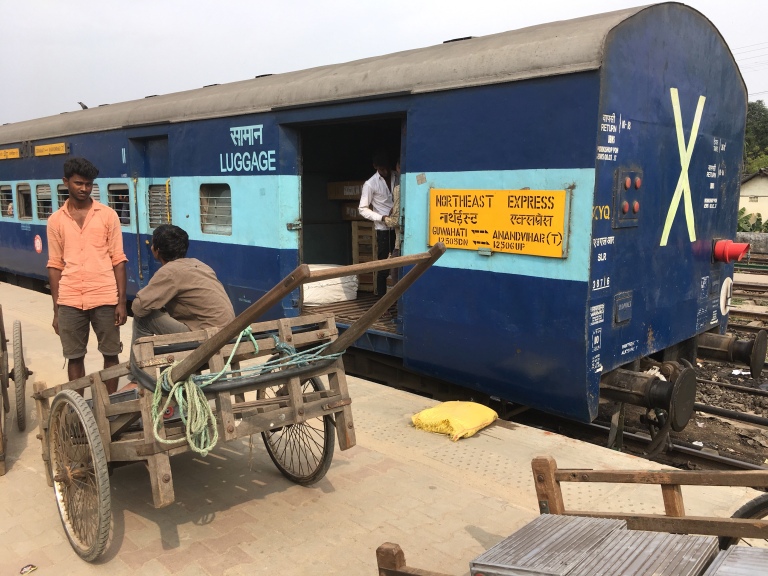 Camp three, the leech infested place, deep in the dramatic beautiful forest, on our jungle trek, marked the furthest point from the start of our journey. Also the point that we were living at the most basic. As we travel back across India we will get back our luxuries that we take for granted in the west. At camp three we were pooing in the jungle together with the leeches and snakes. Washing was not an option for fear of being eaten alive by insects. Everything was quite difficult. Even getting into the tent meant a complete check that you weren’t bringing in any leeches. 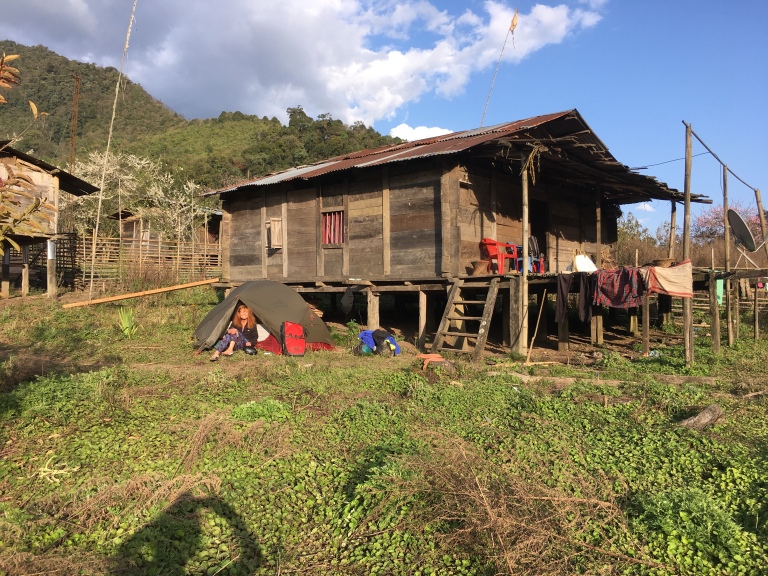 Once back to the village Singha we had a tap to wash under and a pit latrine at the edge of the village. It felt like luxury. Other villages had a small stream with water diverted down a bamboo pipe that you could wash under. We got quite good at washing in public wrapped in a sheet.

Once back at Tuting which now seemed like the bright lights, with many shops selling a variety of goods, things just got even better and we were able to stay at a guest house instead of camping.

After a gruelling 15 hour jeep journey out of the eastern Himalayas we got to a place with hot water, the first hot shower in weeks. The beds became softer, not just a sheet of plywood with a thin quilt like mattress. It felt really good. The food was getting more varied again. It was great having roti, with thick dhal and vegetable curry, making a nice change from large heaps of rice with watery dhal and cabbage.

It felt strange travelling in vehicles with our bike on the roof. We passed by all the places we had spent weeks cycling through, but now we were separated from from that world out there. Sitting statically and just watching it go by. 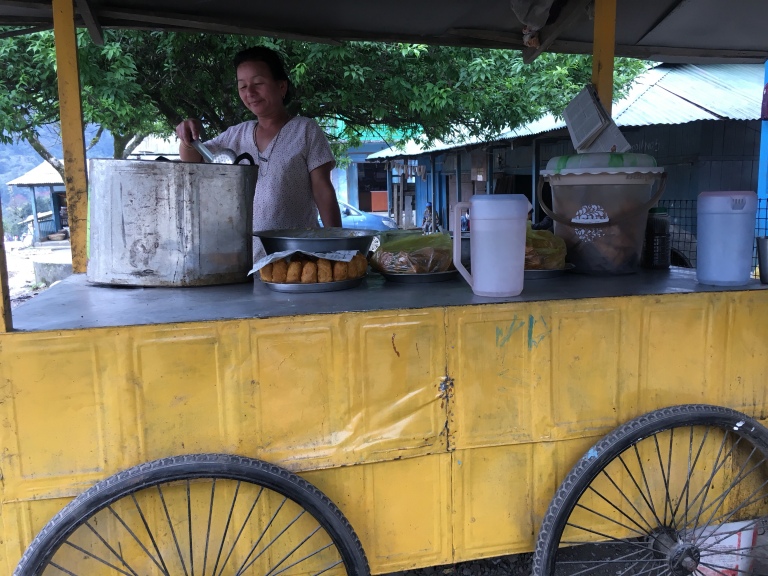 From Guwahati we took the North East Express train back to Delhi. First we had to dismantle the bike and pack it to boxes for the train journey and the flight home. A friendly bike shop gave us some boxes which we transported to the hotel on top of a cycle rickshaw.

We followed on the tandem. Weaving our way round the city traffic chaos, the last bit of cycling of the 2600 mile trip. An evening of dismantling the bike and packing it carefully for the long journeys home, and the next morning a flatbed auto rickshaw took the boxes to the railway station. Helen squeezed into the cab with the very large jolly driver and I sat in the back with the boxes. The bike was booked onto the Delhi train for the next day at the baggage office. With the bike ticket in our hand we left empty handed now, hoping the bike would end up on our train the next day. 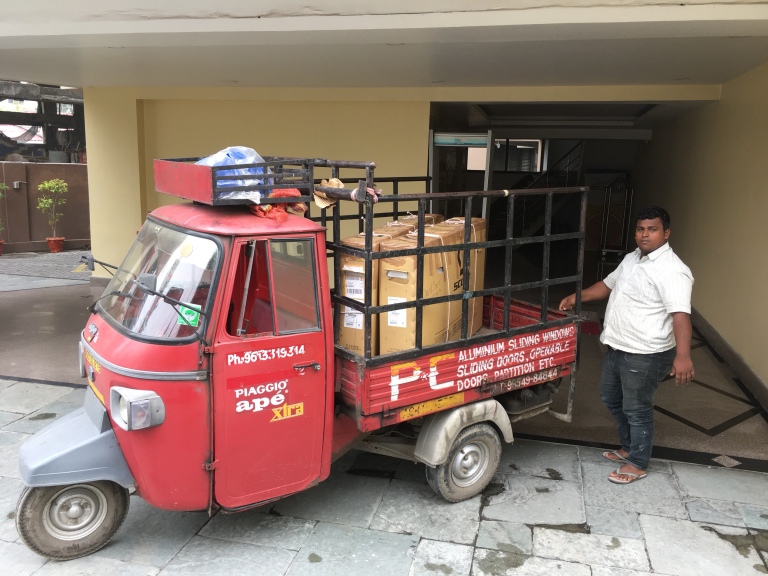 We got to the station the next day very early because we didn’t have a sleeper confirmed. We were 167 on the waiting list, but as so often in India, things normally work out in the end and we got the second class sleeper. The station was busy. Transport was arriving, rickshaws touting for business, burgundy shirted porters chased work, carts loaded with jute sacks were wheeled about the platforms. There was a lot of purpose and activity. 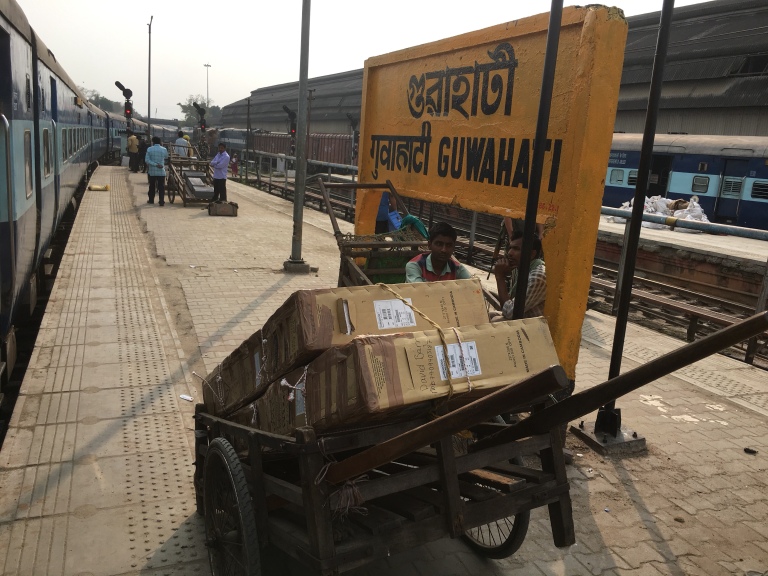 We found the bike boxes on a cart on platform 4 near to the luggage carriage of our train, which was something of a relief. We watched them being loaded before finding our seat. 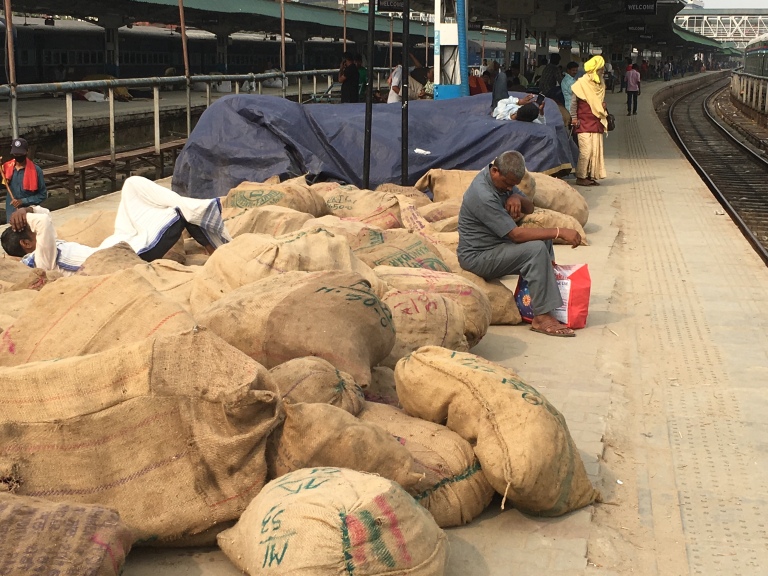 The North East Express train rolled out of Guwahati station on time, passing make shift markets, rubbish recycling and urban squalor, and settled down for the thirty three hour journey to Delhi. The green cultivated flat land of the Gangetic plains passed us by. Towns, full of colourful busy people came and went. Cricket was being played on waste ground. People selling food and tea walked up and down the train calling out what they had in a kind of melodious singing voice. Others were selling all kinds of things ranging from cloth to torches to mobile phone accessories. A kind of mobile market joined and left the train. 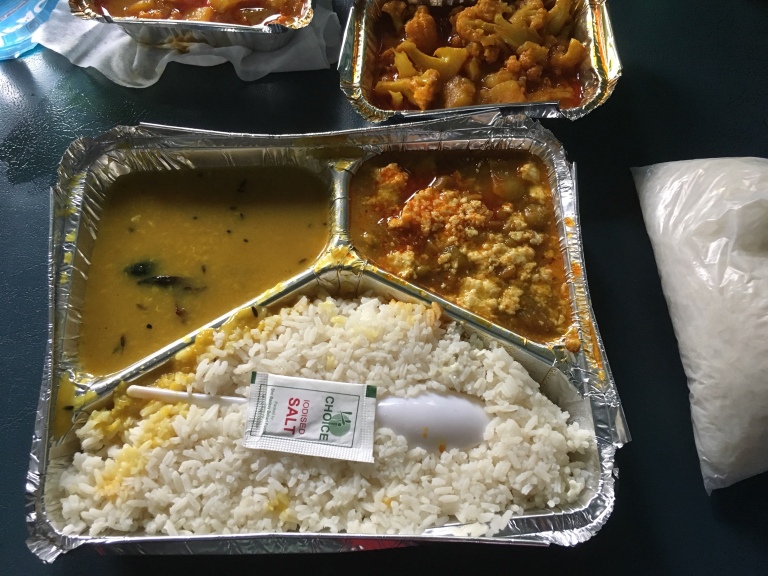 We ordered a proper lunch from the Pantry Car, which came along a couple of hours later. A lovely dhal, veg curry, Indian cheese, and rice, followed by chai, served by a guy carrying a large aluminium kettle.

India drifted by the train window as did the hours. The day went to night and we bedded down. The next day arrived and we realised we were many hours behind schedule, maybe eight one passenger said. No one was cross, they just accepted the delay. The traders and hawkers carried on persistently walking up and down the train selling their things. Chai was the most common item on offer, even at 4.00am a guy with a large kettle calling out “chai, chai, chai….” . Soft drinks, nuts, Bombay mix, boxes of biryani, large baskets of cucumbers being carried on someone’s head, samosas and snacks, bed sheets,and tacky goods were all on offer, giving a colourful scene to the train corridor. 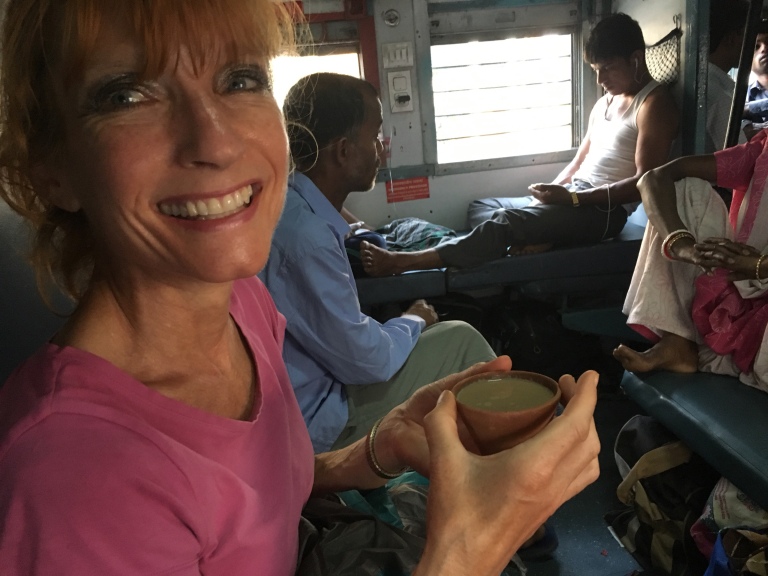 Another day ended as we approached Allahabad, small kites fluttered above the buildings and the sun was setting as we crossed the Jamuna river. As darkness fell we settled down to another night hoping to arrive in Delhi the next morning about twelve hours late. 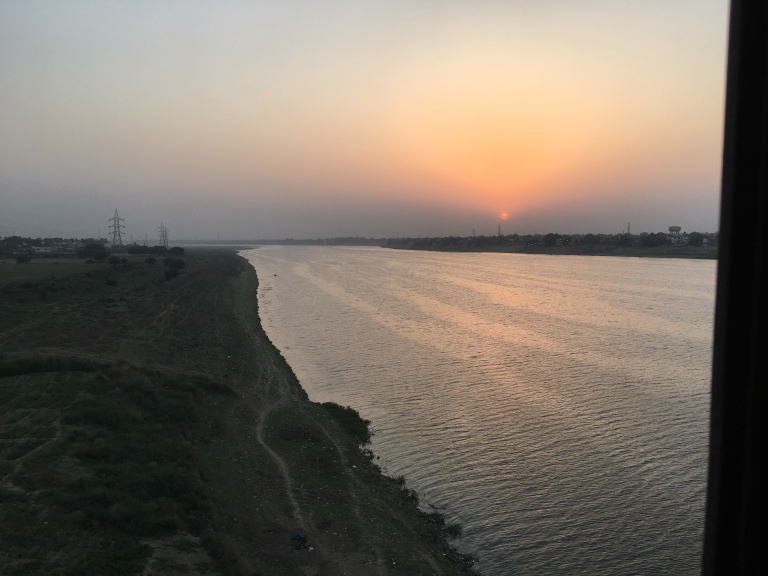 Eventually back in Delhi. Back to where we started our journey three months ago. We left then apprehensive of what might be ahead of us, how would we cope with some of the discomfort, the people, and just being on the road for such a long time. We return enriched with our experiences that will always be with us as wonderful memories, and we have thoroughly enjoyed being together on such a fulfilling journey. 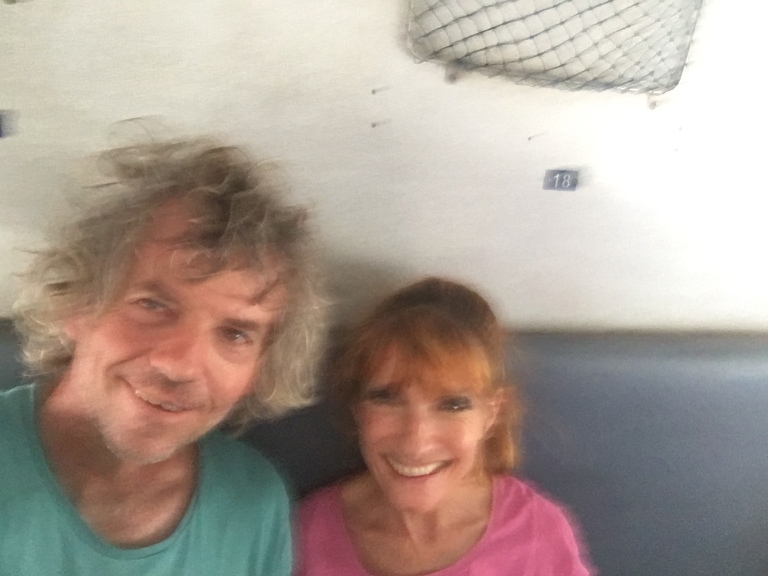 One thought on “Back to Delhi, where it all started”