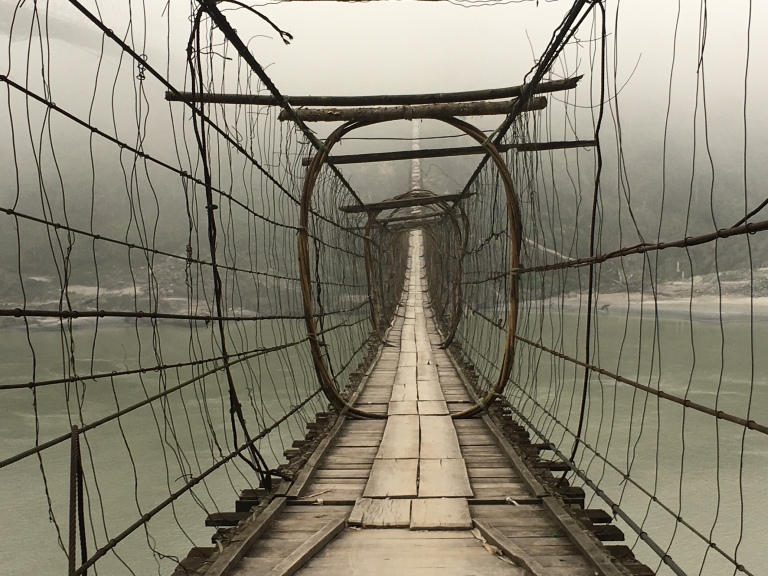 We woke at 4.00am to a howling wind. The thatched palm roof was shaking with the gusts. At first light we were on our way, heading to the eastern Himalayas. We were fighting against the wind roaring down the valley from the mountains as we crossed the bridge. 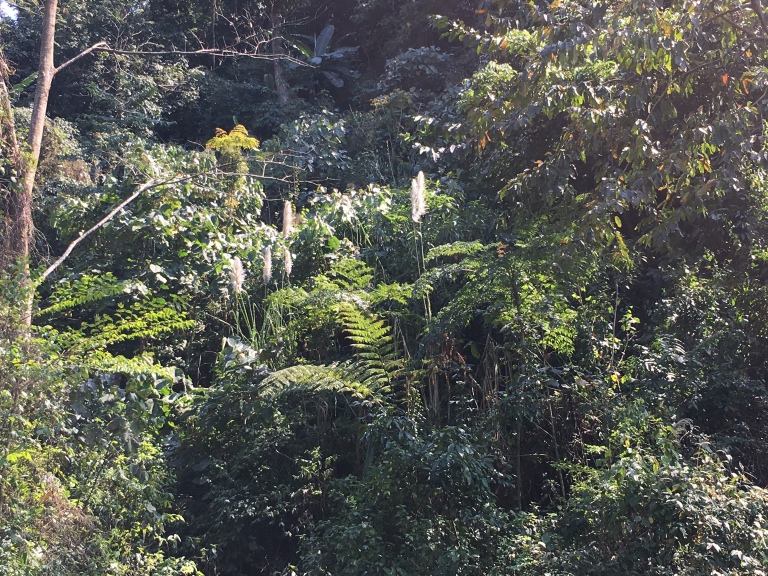 Soon we were climbing through jungle with the turbulent turquoise river below. The noise of the water pouring over the rocks with vigour echoed around the valley. The mountains weren’t as harsh as in the western Himalayas, they were tamer, tropical and lush. The woolly green canopy of the forest followed the shape of the mountains. The place was quiet and empty. We were alone. Villages were far apart and when we came upon them it was a chance to get food and fruit, which was very much appreciated. 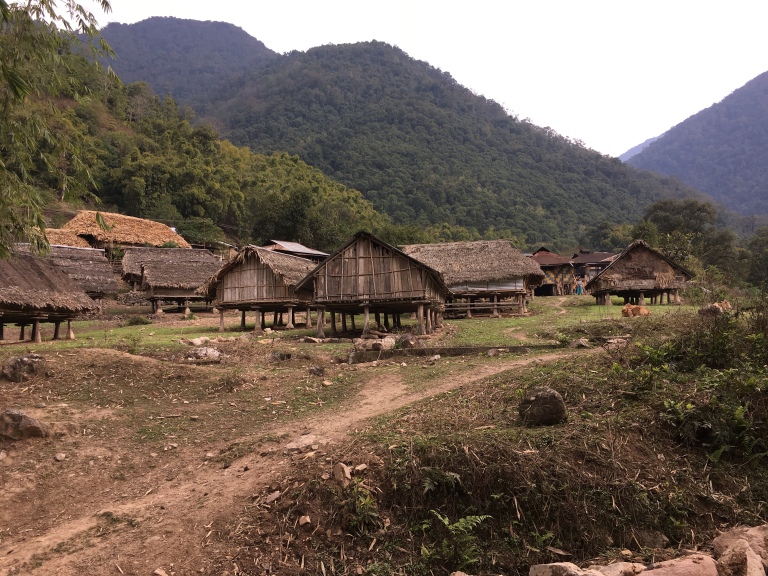 The bamboo thatched houses sat on low stilts, often with staddle stones too. Hunters sometimes appeared from the forest with long slender rifles and a game bag on their backs.

The Adis people are lovely warm folk and we had many good exchanges out on the road. There were some great characters. It’s what makes our day, these little meetings, talking about our families and our journey. As we climbed the final hill to Mariyam a girl came upto us and presented a pineapple, “saying this is a gift”

The road varied from perfect tarmac to deep rutted muddy tracks with streams crossing, but always very quiet, practically deserted. At times the going was hard as we slipped around the muddy way, riding through thick brown water that came upto our panniers.

For two days we followed a tributary valley through rolling jungle clad mountains, fast rivers below us, and snowy peaks in the distance. We eventually climbed up over a pass and descended to Yingkiong back in the main Brahmaputra valley. The river was now a mountain river unlike the wide sluggish one that we had crossed in Bangladesh and Assam.

We descended right down to the river and crossed it on a rickety suspension bridge. We climbed the other side of the valley, snaking our way through pristine jungle, rarely seeing another person. This is a truly beautiful place, virgin forest with really tall straight trees, growing to great heights on the mountain side to compete for light. There were huge, broad flat leafed palms with arching branches, creepers hanging over rock faces with water dripping through them, tree ferns growing boldly above other vegetation, waterfalls and cascading streams and rivers tumbling over large boulders beneath the wide green luxuriant forest foliage. I had never seen anything like this place, a spectacle of green with so many big shapes and textures of plant life. Magical colourful butterflies darted about.

The rough and rocky road continued, and wound its way up through the forested mountains, then dropped right down to small streams and rivers that cascaded down small steep boulder filled valleys. 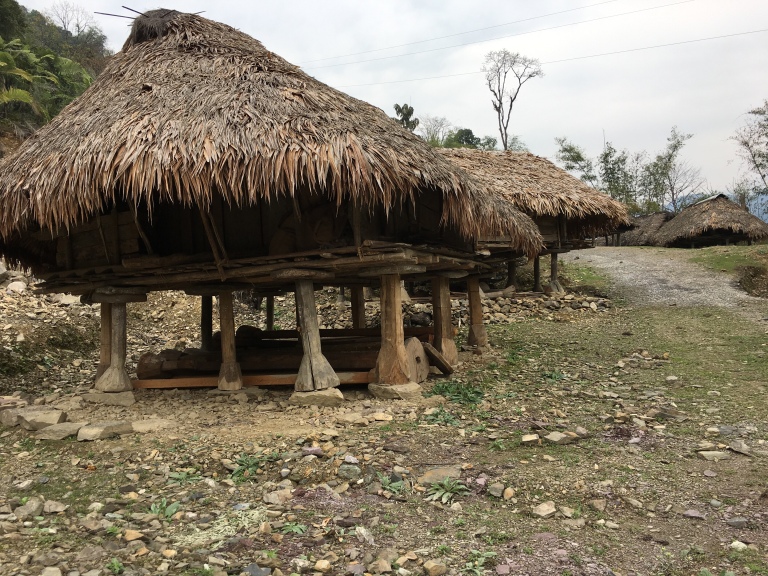 We were finding it hard to get food and when places came up you had to buy what you could. We are carrying a fair bit of supplies now and often rely on filtering water from streams. When we were cooking our lunch by the track in the most beautiful location with a grand scale vibrant landscape around us, a small police truck pulled up and wanted to see our permit to travel in this area. He spoke good English, quite a senior chap in plain clothes, and had two assistants in camouflage clothing with him. An automatic rifle lay out in the back of the truck. He was quite official like to start with, but then after a long look at our permit, he became more relaxed, and was amazed by our trip. After asking our ages, there was a belwedered look and he said” you are on quite an adventure” After a look at our maps.me app on my phone which he thought was amazing, saying “how can this work” they continued on their way and we went on ours heading upto the village of Jambo. 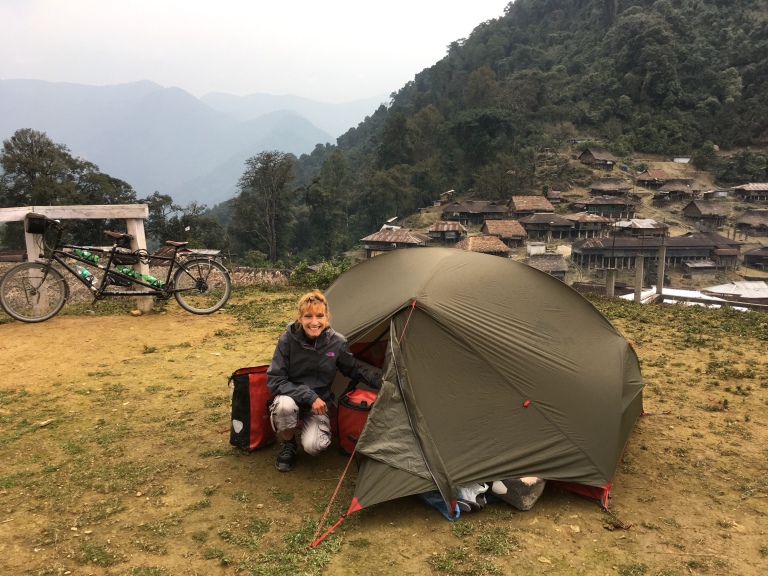 It was a hard climb upto Jambo, which was positioned at a col, with fine views over the Brahmaputra on both sides as the river goes round a large meander, and we set up our tent on some land in the middle of the village next to a green where people play cricket. Kind people brought us sweet ginger tea and cooked potatoes with salt.

We just got the tent up with lots of help from villagers before a storm came in with hail and thunder. We ate noodles and sardines huddled in our tent as the storm blew over. The village straddled the ridge and low stilted bamboo and timber thatched houses spread along it. 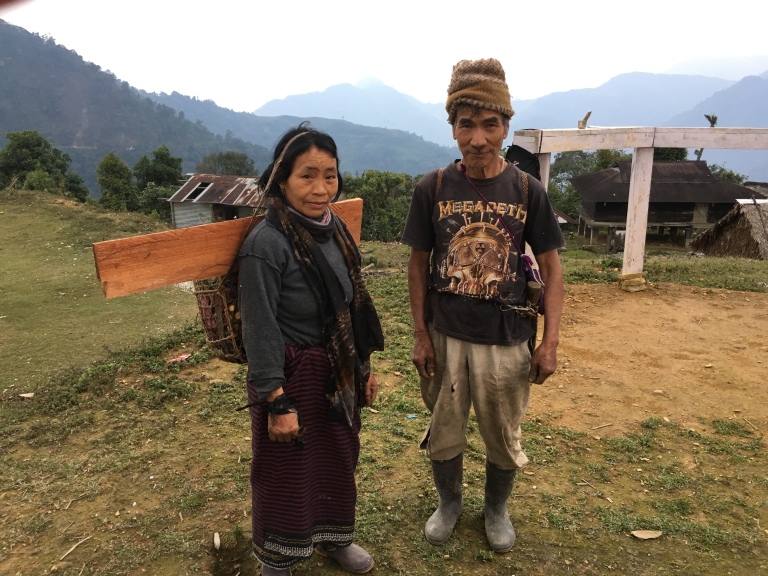 Every part of our setting up camp and cooking was watched with much interest. People were fascinated by our kit, sleeping mats, cooker, pots, and tent, every detail was inspected. They were good kind people who brought us tea, offered food and gave us space. There was fascination from them, but it never felt overpowering as it has done it some places, just friendly. 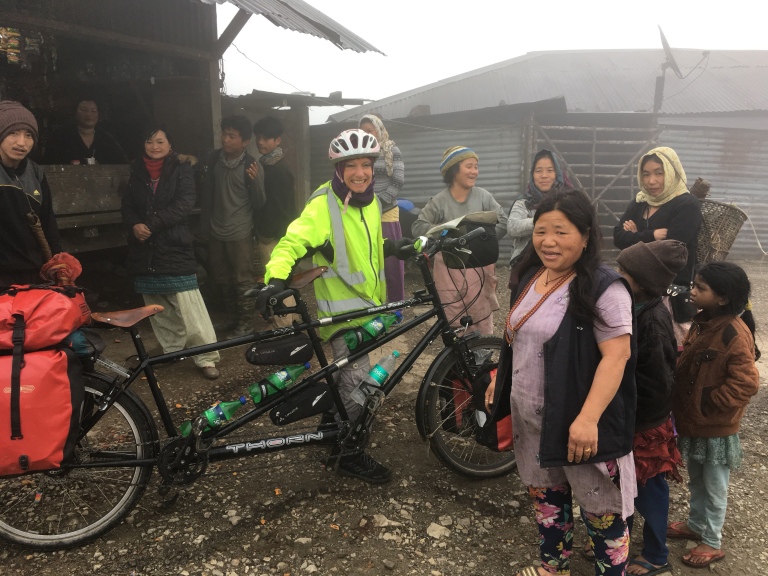 A stop at the small village shop for some provisions, before setting off for our day on the road, and a lot of the village came out to bid us fair well, wishing us “happy journey” which is a kind greeting we get from many people on our journey through this part of the Himalayas, populated by the Adis people. They are Animists, worshipping Donyi-Polo ( Sun and moon) 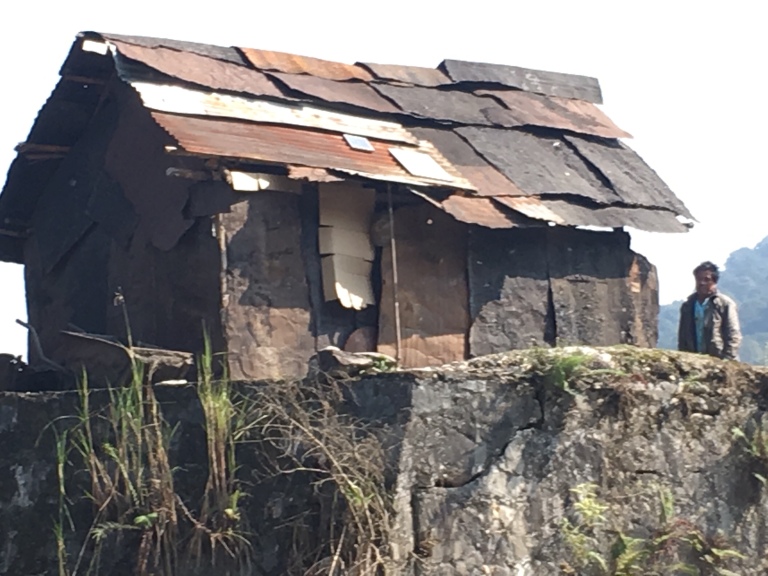 Our way continued following the now much smaller Brahmaputra high up into the eastern Himalayas. The noise of rushing water down steep rocky streams always nearby. Waterfalls and thick jungle surround us. 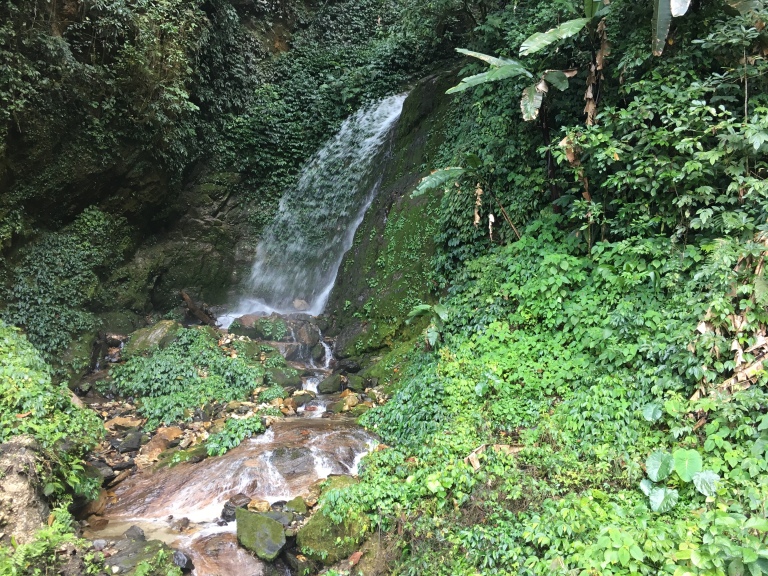 Great characters emerge from the forest with guns on their backs and machetes in holsters on their sides. The Adis are gentle kind people and we have many stops and exchanges of smiles with them. Their villages straddle ridges and hills with stilted bamboo houses spread down the hill looking out over the valley like spectators in the audience of an amphitheatre. 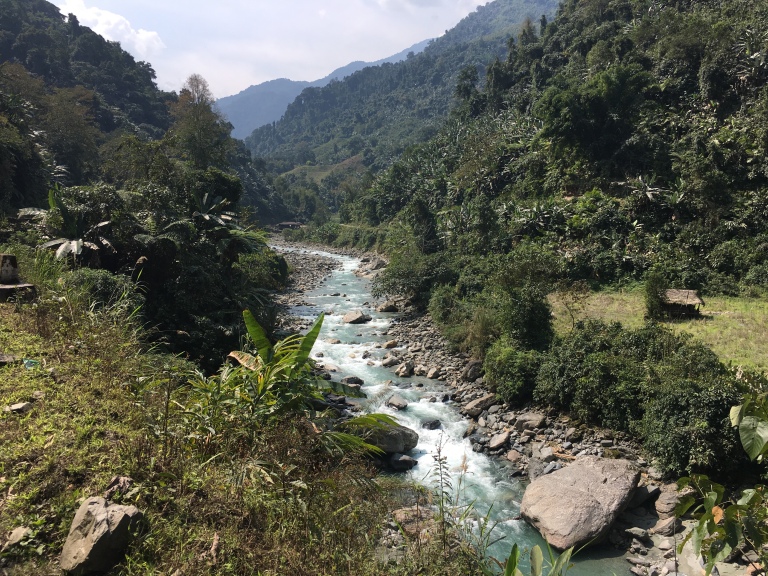 Army convoys, with big rugged trucks passed us. Soldiers with beaming smiles waved to us, like kids on a carrousel at the fairground waving to their parents. It wasn’t a macho look for this army controlling a disputed border region that China thinks is theirs.

The last rocky climb brought us over the hill to views of Tuting. White flags, with inscriptions, on long bamboo poles fluttered in the breeze. A kind of dream catcher greets us at the beginning of the town. Coloured flags were strung above buildings. Chinese crockery was on sale in the shops. Buddhists and Tibetans are here and we had entered a new land. The Anamist Adis people also live here proudly flying their white and red flags above their houses in large numbers. We find a lodge, and the other guest staying are a group of palmists from Mumbai.

We are now 17 miles from the Chinese border in the far eastern Himalayas.This is an empty corner of India. The 170 miles from Pasighat on the lowlands, has taken us 5 days climbing through jungle, crossing many rivers and streams on rough, rocky and muddy tracks. It takes 2 days to drive it. We have had to be self sufficient a lot of the time, camping, cooking and carrying our food. If we find, oranges, bananas, tomatoes, or tinned sardines in a village we get quite excited, and it boosts the noodle and rice diet, but this doesn’t happen often. As we have pushed on up this remote road it is becoming apparent that some people already know about us, the gossip is spreading ahead of us. Others in the few trucks we see that ply up and down this hard road say they have seen us a few times. We are starting to recognise familiar faces from villages further back as they pass us in the back of trucks, hanging over the side waving and calling out.