With a little apprehension we set off very early in darkness, on our first day into the Himalayan foothills. We had no idea how far we could cycle in a day with the climbing involved. We were going learn a lot on what we were capable of. We wondered whether we would reach somewhere to stay or if it would be necessary to wild camp on the way.

We followed the Ganges upstream for a few miles. As daylight started we could see the valley narrowing and steepening, cliffs and rock outcrops surrounded us. The river ran fast through large rounded boulders and we could hear the white water. The grey turquoise water swirls round the rocks.

We followed a tributary valley and soon were climbing on a good small quiet road through the woods, monkeys swinging in the trees, different sort this time, grey ones with long tails and fury foreheads. 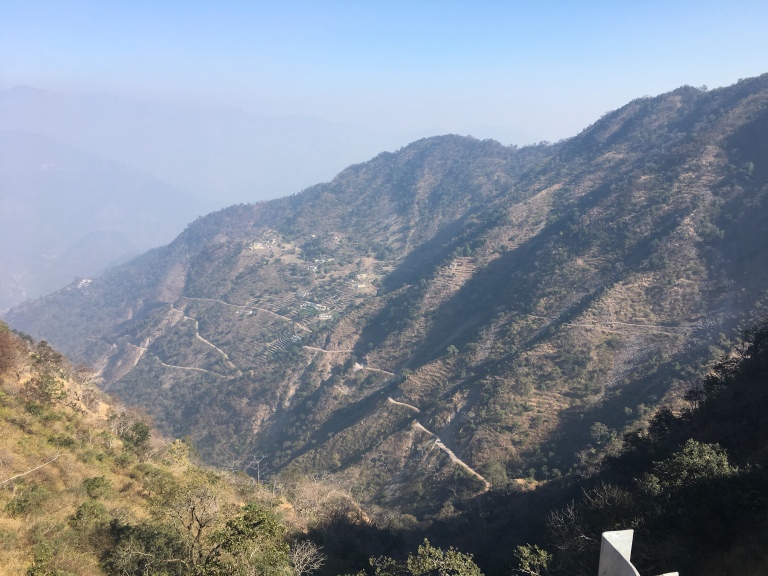 We climbed and climbed, and kept going. This was tough. Were we fit enough, or was the bike fully laden too heavy? We pushed on climbing about 2000 feet to a col where there was a chai place with amazing views of the Ganges valley. It was cold when we stopped and we sat inside on a wooden bench near to the chai being made. The small, dark, and simple room had a table in the centre, a cooking area at on end and a small shop at the other, selling very basic provisions like biscuits and soap, displayed neatly.

We had had 3 bananas for breakfast, and biscuits and nuts on route, so when we reached the village of Silogi a further 2500 feet climb, after 7 hours of cycling uphill, we absolutely fell on the dhal and rice we were able to get. Silogi straddles a ridge and there were impressive views of snow capped mountains in the distance. The sunlight caught the snow, making the mountain peaks show up above the hazy foothills. 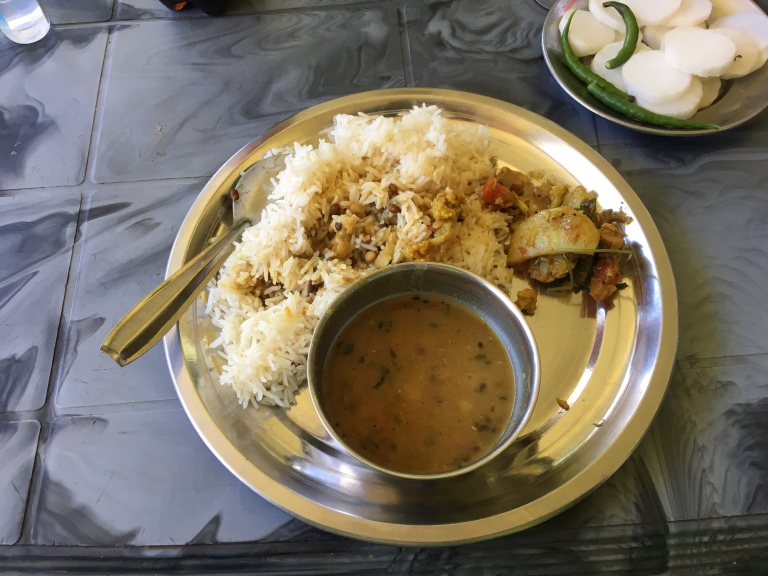 We still had some way to go and were hoping to make it before dark. We were high above the valleys now. Settlements were spread out and quite scarce. They clung to the mountain side, with each house commanding a wonderful view like in an amphitheatre. The clarity of the massive scenery was obscured by haze. Some parts were ambitiously terraced to the very tops of hills. Small temples were a very common site, perched on hill tops or other promontory positions overlooking the valley. 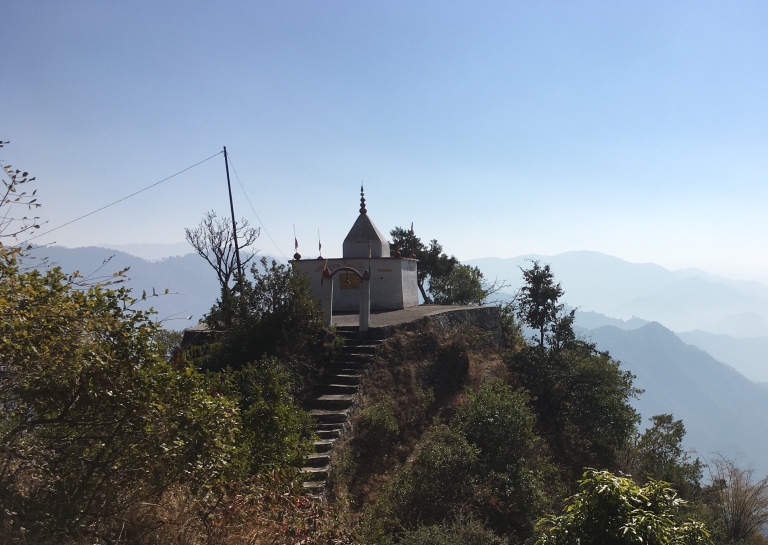 We pushed on despite our fatigue. The road followed one side of the ridge then the other, dropping down then climbing again. The dramatic snow capped mountains to our side far in the distance.

Eventually we made it to Gumkhal, and a hotel. We could hardly speak with exhaustion. It was freezing cold too. We sat on the bed in our room with our down jackets and snoods on, reflecting on the day. It was the hardest 52 mile day we had ever done.

The next day things looked better after a good nights sleep and as the sun rose changing the colour of the snow mountains orange to white, we formulated a plan. We decided to change our route a little and use some west to east river valleys further north.