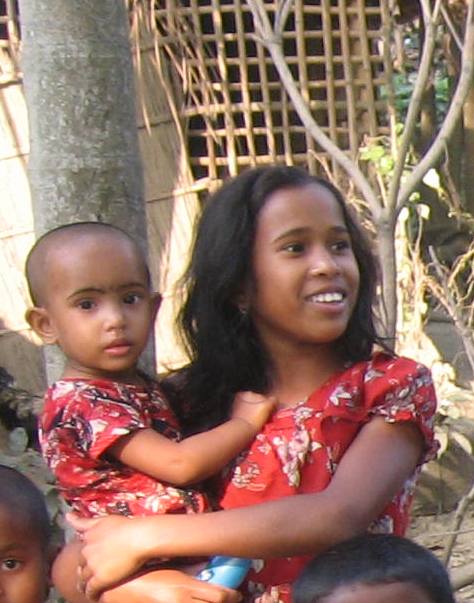 Boxing day we had a rest day and stayed at the posh hotel, a surprising bargain, £15 for all of us including food and drink. Then we were back on the road for the final push to Rajshahi on the banks of the river Ganges, our destination for our bike trip. Back out in the countryside, some roads, some along the edge of the railway track, and some sections following the compass on little mud paths through the fields and villages to avoid the busy roads.

Our last section into Rajshahi, we could no longer avoid the chaotic mess of rickshaws, buses and lorries, horns blowing, bells ringing, we try to weave our way through, but this time it is just too much and decide to hitch a lift in a three wheeled truck.

We had cycled 510km, got two punctures, needed a mudguard welded back on, 6 rivers were crossed, poor Warty fell off her bike 5 times, and we consumed well over a hundred chapattis.

Our task now was to find a project to donate our bikes to. On our way to find a hotel we are shown the way by a friendly  English teacher called Abdul. By an absolute stroke of luck when we told him what we wanted to do with our bikes, he said he had worked for a charity that reintegrated street children back to their villages. Perfect, we set off on our bikes for the last time and went to the head office of the NGO where we met the children who would be having our bikes. A moving ceremony took place with the ownership of our bikes being officially transferred to these children. Documents were signed and stamped, tea and food was brought in, and photos taken.

Quite a surprising press interest followed and we were interviewed on tv and by many newspaper journalists.

We board the Silk City Express train to Dhaka where we are meeting our friend Garry who is cycling around the world. On the train we cross the Brahmaputra, pass colourful people working in paddy fields, and neat villages with trees. We are not close to them like we were on our bikes.