The road from the border lead through mile after mile of rock being crushed, ladies working like ants moving stone to the crusher and reloading the lorries with the crushed aggregate that then headed south towards Dhaka for construction. The air was filled with dust, and the noise of the crushers, running non stop, was deafening. It was hard labour with material being carried in large dishes on people’s heads, lorries unloaded and loaded by hand, and crushers filled.

A new country always has a different feel, even closely related countries. There are many more food stalls, serving parathas, meat curry and dhal. We are loving the richer food. The towns become frantic by the evening, lots of people out shopping, eating, and commerce is going on everywhere. They are very colourful and go on much later in the evening.Big pots of food, deep fried snacks and bubbling curries. Fabric shops and tailors, with stacks of vibrant patterned cloth, and a row of small stools out the front for customers to sit on and make their choices. Brightly decorated rickshaws weave their way through the crowded street. The mosque starts up for the call to prayer. 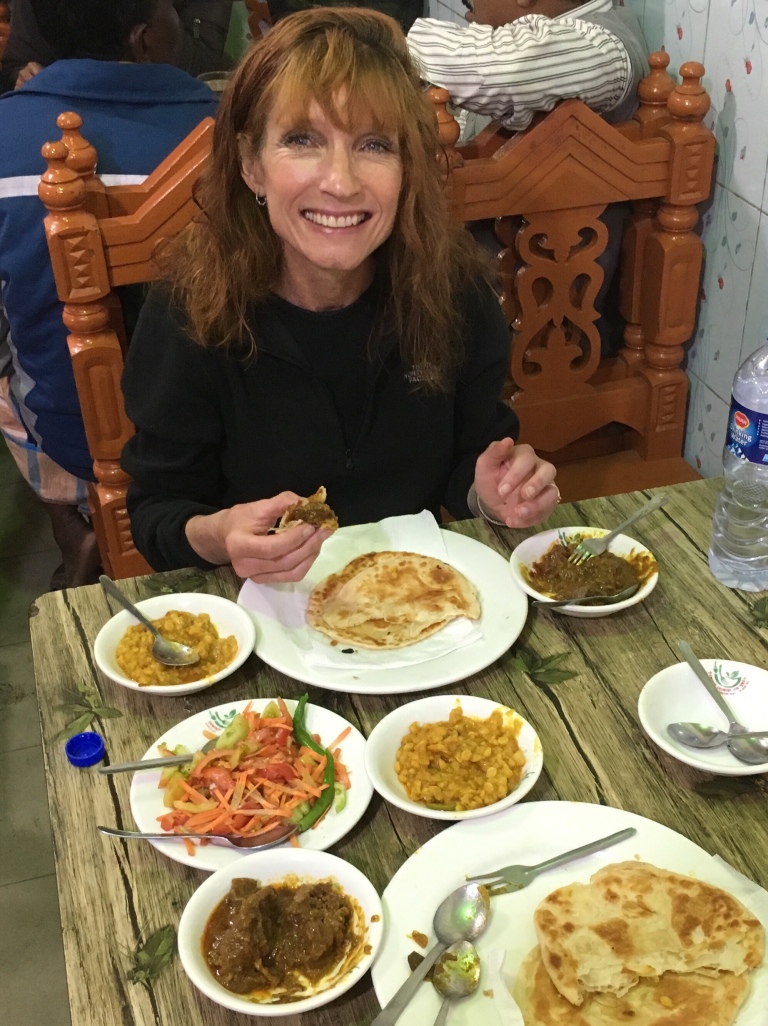 Surprisingly good roads take us through north west Bangladesh, vibrant green, flooded rice fields are on either side of the road.

As we approach the Testa and the mighty Brahmaputra rivers the landscape changes. More villages, the road narrows and is on an embankment, lots of waterways each side, some flooded and some dry with marooned wooden boats lying on the bed. Rickety bamboo bridges span the small dry rivers.

Bamboo and banana palms line each side of the road. 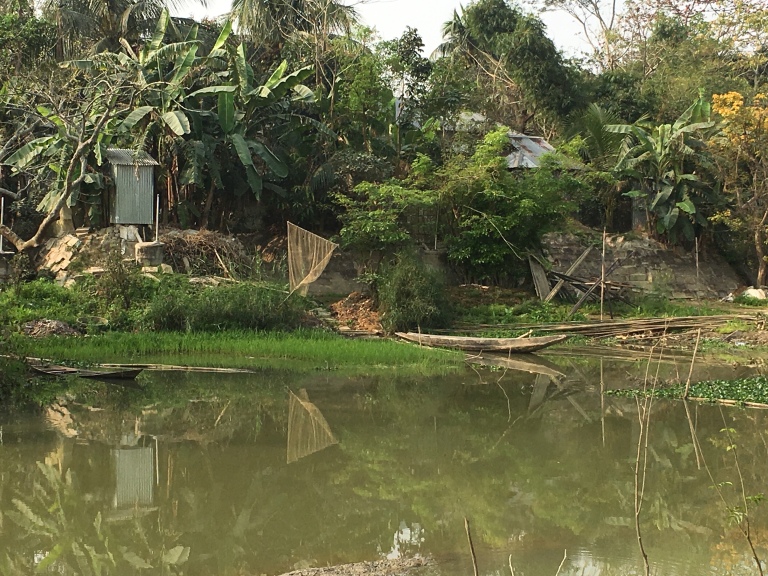 The road became rough and sandy and soon we were pushing the bike through deep rutted sand. It was hard work and we knew we were some way from the crossing point of the Testa near Belka Bazaar, where we hoped to find a boat to take us across. The harder the road got the more we thought and hoped there would be a boat as it was a long way back.

Eventually and after a very good lunch stop of pakora, samosas, roti and curry, the river came into view and there was a fine wooden boat waiting on the sandy bank. The tandem was loaded on board and sat abeam the boat with its back wheel sitting on the gunwale. A couple of motorbikes were already on board and quite a few passengers had boarded. We stood on the slatted floor in the hull of the country boat, as two men manoeuvred the craft across the river with long bamboo poles. We waved good bye to the small crowd that had gathered on the sand bank, now standing in a line, their figures silhouetted against the bright sky, as we slipped across the water to the other bank.

We cycled along narrow paths through small rice fields and small villages occupied the higher pieces of ground that must be above the monsoonal floods.

Trying to find somewhere to stay at Chilmari we mistakenly let ourselves into the police station, thinking it was somewhere to stay. The place was rather deserted but after a little while a police truck turned up and three men, dressed in normal clothes came over and introduced themselves as various high ranking police. Initially they were slightly suspicious of our intentions and confused by us being tourists. Bangladesh doesn’t really get tourists and definitely not in this area. Actually this is our second encounter with the police in three nights. They seem to be worried about us. Things soon became more relaxed and after some selfies and a chat they agreed to show us to an NGO where some foreign people have stayed before. So we cycled off to look for this place following the blue police lorry as our escort. The three policeman stopped for tea and there was some discussion about whether it was possible for us to stay at this Swiss NGO, but by now the police were feeling completely responsible for us, and were keen to have us looked after. They also were feeling worried whether we had had money to pay for the accommodation and offered to pay for us if we couldn’t afford the £7 room charge.

We got down to the ghat on the Brahmaputra at Chilmari early the next morning as the sun was rising, which gave the water an orange tinge, that clearly defined the sand islands that lay in the distance. Several dark wooden boats were moored at the river bank. We needed to cross the Brahmaputra which is a good 10km wide at this point and there are many sand islands called chars. The chars are a fragile environment that are home to several million people. The islands emerge after the monsoons and after a few years become fertile enough to farm. Eventually people move onto them and villages form. However after any monsoon the islands can get washed away. It is a very fluid landscape and the char dwellers are some of the poorest people in Bangladesh.

With the help of a kind plump policeman we found a boat to take us on the two hour trip to Rajibpur Char on the east side of the river. 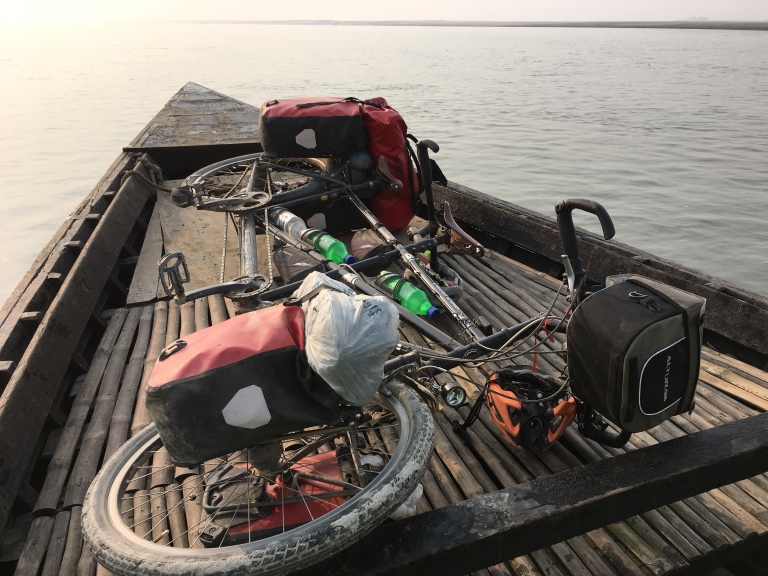 We loaded the tandem onto the boat and lay it down on the split bamboo foredeck. Soon the diesel motor was fired up and we were picking our way through the chars across the Brahmaputra. Some were new islands and some were established. We could see sections of crops collapsing into the water and people’s hard work and food being taken by the flow of the river. Similar boats to ours were carrying passengers and live stock to the islands and others were fishing. We passed one char after another, sometimes slowing right down to find the route through the shallows, and we thought how vulnerable the char inhabitants must feel during the monsoon floods.

Later in the day we were invited into a school. A simple corrugated iron set of buildings, painted blue and arranged around a central courtyard. The classrooms had a blackboard and several rows of wooden desks and benches. 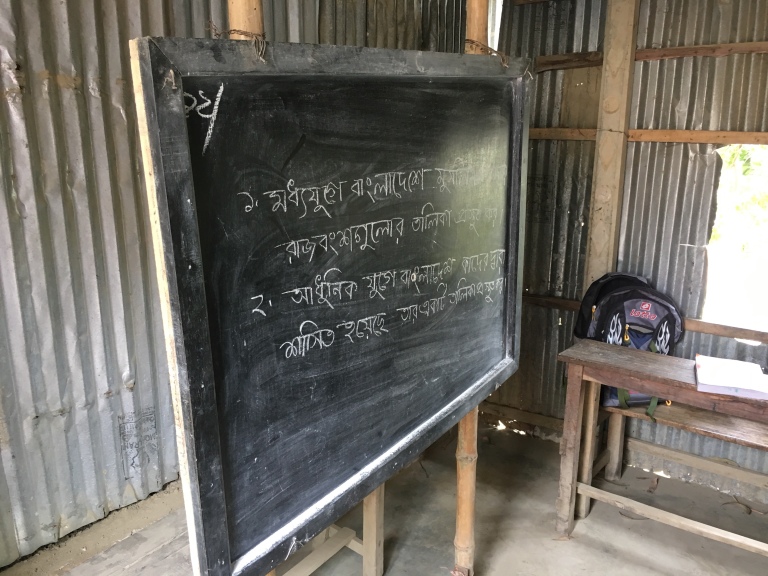 It was great reaching Durgapur and staying at the YWCA, a Swiss funded NGO. We had stayed here in 2011 when we cycled across Bangladesh with Becky and Katy. It was nice to have some familiarity and they remembered us from before, and wanted to see photos of Becky and Katy now.

The next day we needed to cross a large wetland area. It’s a very beautiful part of Bangladesh, and what we really remember from the 2011 trip. Small strips of land surrounded by water or rice fields, containing paths and villages, with palm trees and vibrant tropical vegetation overhanging the ditches.

It was a beautiful scene of water, small narrow working boats, villages with life going on, partially shielded and shaded by palm trees and vegetation. Washing and fishing nets were hung up to dry.

Many narrow pointed boats lay on the mud, left by the monsoonal floods.

The raised villages and tracks must be like islands and threadlike causeways during the monsoons.

Delicate bamboo bridges and small overloaded boats got us across the rivers.

It was a hard 65 mile ride to Sunamganj, 11 hours on the tracks and roads, but always so much life to look at.

At the end of the day quite surprisingly a Facebook group of Bangladeshi cyclists found us. One of them, Sakib, from Chittagong had done a few long distance trips including one to Ladakh in the Indian Himalayas.

The next morning we set off with our new friends on a cycle trip. It was Friday so like our Sunday, a day off and it felt like the weekend. We aren’t really one for groups, but they were an interesting bunch of people and we had some great conversations about politics, education, marriage, gay and trans people. We felt for one lad who loved his girlfriend who he had known for six years, but parents on both sides were forbidding the relationship and insisting on arranged marriage with more ‘appropriate’ partners. This was an educated bunch of people, lawyers and scientists, but things aren’t changing for women and marriage traditions in Bangladesh. 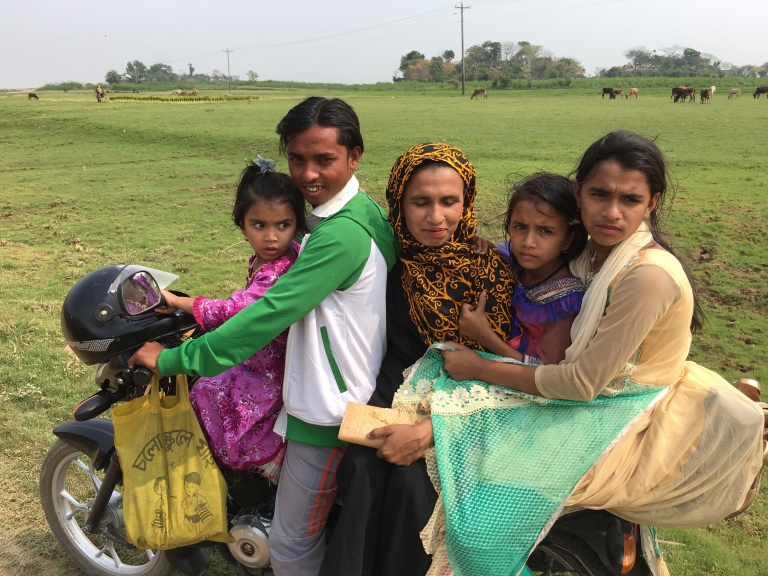 Against local advice again, “the road is impassable and destroyed” they said, we decided to try and cycle the 60miles on small roads to Jaflong. 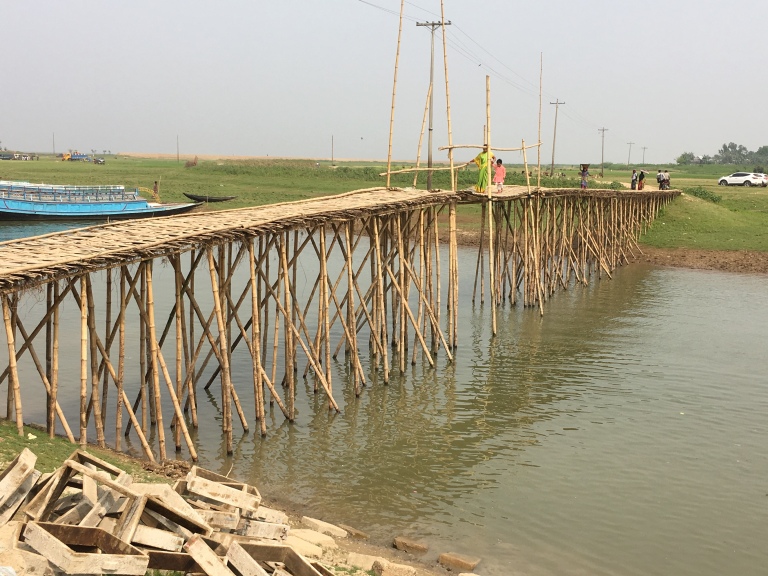 We rode past ricefields at all stages of cultivation, newly planted, flooded with ox ploughing, and dry mature crops.

We took the ferry along the Surma, the two kilometres to where the road restarted. It was a very busy scene. Painted steel boats heavily loaded everywhere, travelling in a disorganised fashion. Small narrow long wooden boats carrying vegetables to market and people paddling them along purposely through the river chaos. The banks were lined with aggregate yards, ships being loaded and unloaded by hand, labourers, men and women running up and down narrow gang planks carrying dishes of stone and sand on their heads. 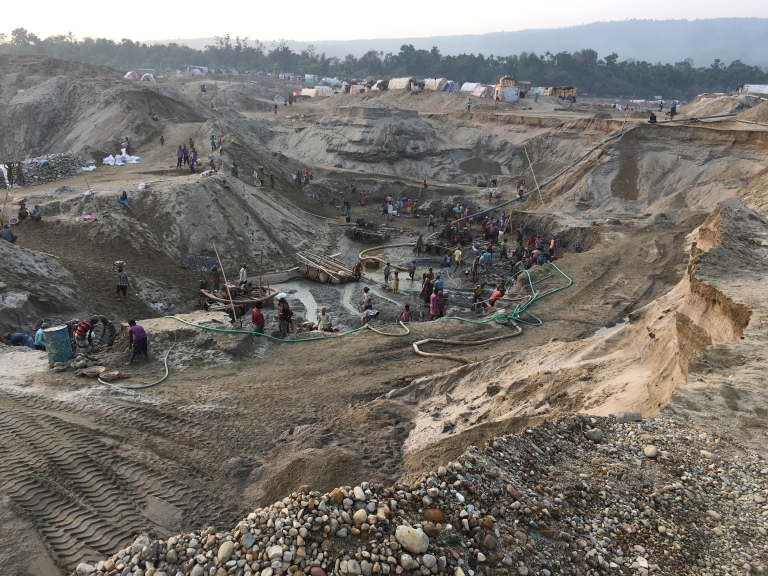 Now close to the mountains of Meghalaya we were entering a region for rock and sand extraction. Every river near the border with India was alive with people digging, and trucks and boats transporting material way. The air was filled with dust from the noisy rock crushers. The lorry traffic was manic and relentless. The trucks kept coming one after another, rolling and lurching around the deep potholed roads. It was very hard going for us on these roads that had been wrecked. They were almost at the stage that they were becoming impassable for the lorries. Progress was slow but we pushed on and thought how ridiculous it is to destroy the roads just for the need to supply the construction industry, and how it must affect the local people’s lives.

Eventually the way returned to lovely flat mud tracks by small rivers and through pretty villages. We were back in the quiet rural scene that we like so much in Bangladesh.

Reaching Jaflong it was a Dickensian scene of people extracting stone below the sand in the dry riverbed, working in holes 15 m deep. Water running dangerously down the these huge holes washing the sand away while armies of workers pulled out the rock and carried them to crushers, where they were loaded into trucks. It was a shocking scene of workers living in make shift slums on the river sand. Lorries ran continuously all night. The town of Jaflong had been destroyed by this and the streets ran with a slurry of sand and rock dust soup. This was big business for someone, fuelled by money, without a thought for the workers and local people. A massive uncontrollable human and environmental sacrifice for the need of materials for concrete.

Early the next morning we headed to the border to cross back into India. Passing a line of colourful Indian trucks that had deposited their loads of coal, we cycled up to the frontier.