With a feeling of emptiness we waved goodbye to Katy and Belle as they boarded the crowded bus back to Kathmandu. The packed bus startled off. They were heading off on their adventures and we were continuing ours. It had been quite a motivational drive for us while we were cycling to Kathmandu, the excitement of meeting up with Katy. We miss both Becky and Katy very much.

Five nights stop was enough for us, drinking fine coffee and eating pizza and cake. We were getting twitchy, and needed to get cycling again, back into the real Nepal, and our routine of being on the road.

We took the old road out of the valley passing many brickworks, people digging up their rice terraces to extract clay, slapping it into moulds, then out onto the ground, stacked high to dry in the air before firing in the kiln. It seemed short sighted destroying the rice terraces for brick making to supply Kathmandu’s building boom.

After a few kilometres on the busy road that goes to Lhasa we turned off onto a superb quiet road, built by the Japanese which climbed up over the mountains to the Sun Kosi river valley. We were back in the immense landscape of the Himalayas, fast turbulent rivers, the road clinging to the mountainside as it wound its way through the relief. There were narrow suspension bridges leading to the other side of the valley. 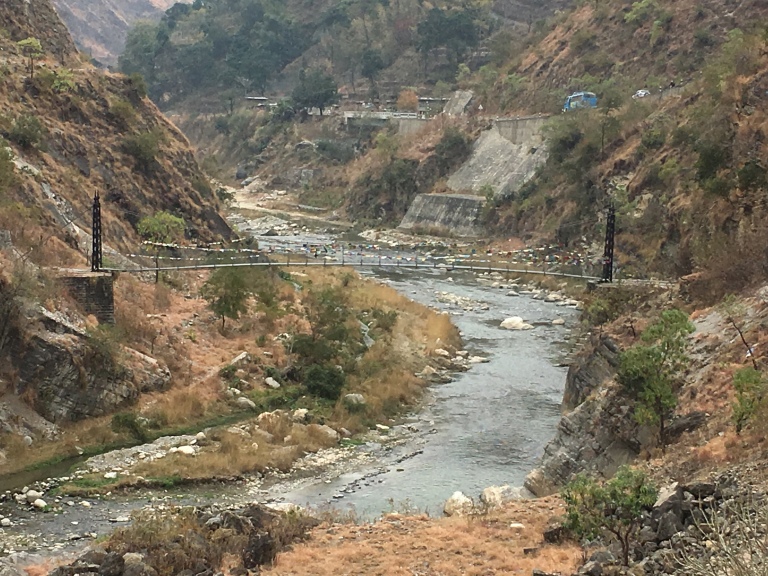 Ox ploughs were working on the terraces of the valley floor. A young lad working hard to keep the beast carving one furrow at a time, up and down the level terrace. 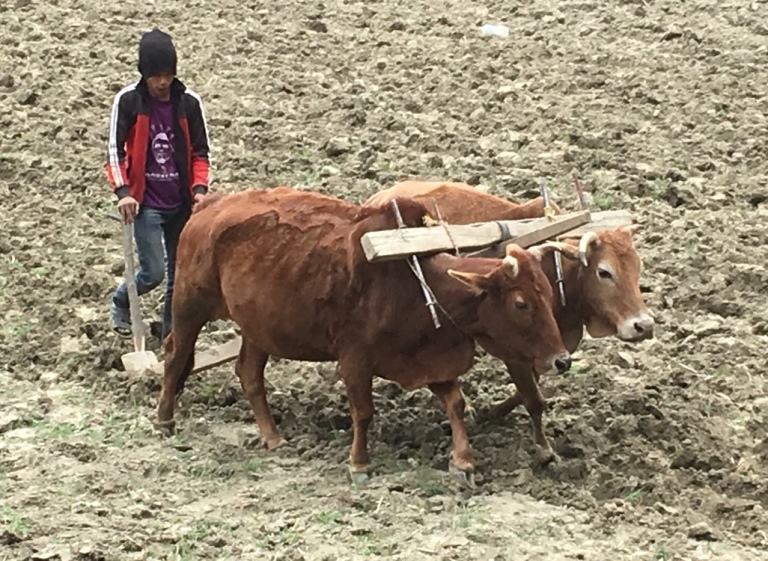 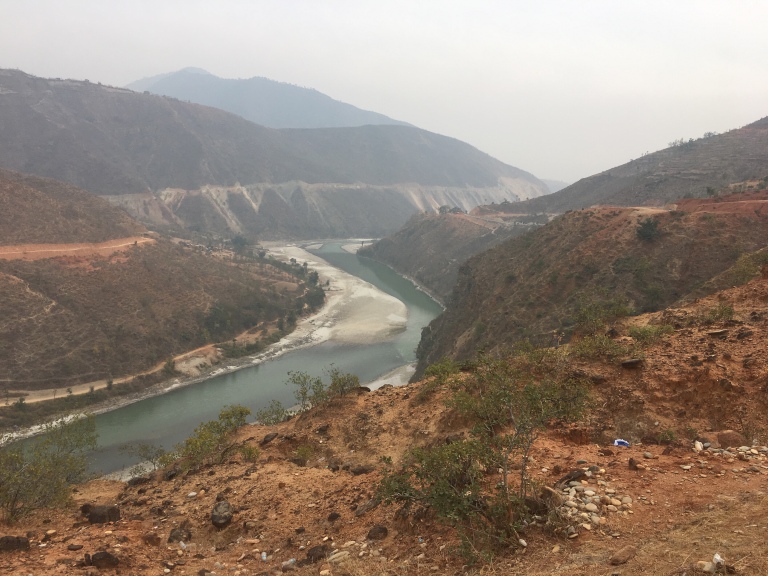 We followed the Sun Kosi until Khurkot and then the next morning climbed the 3000 feet out of the valley, on the well engineered switch back road. Once at the top we started our decent down the other side heading towards the Terai of Nepal. The vast Himalayan landscape started to give way to smaller green forested mountains, then the valleys became wider, the vegetation and forest became more tropical, and eventually the rivers were wide and flat with huge level gravel banks. The air became warmer and humid. The people started looking more Indian, quite a change from the faces of the people from the mountains. There were Ox carts on the road, men wearing white lungis, and the towns felt more like India.

Most of the night at Janakpur we could hear the singing and wailing from the large Hindu temple nearby. Early the next morning in fog we headed east along very rough roads close to the Indian border. The scene was very rural and poor.

We passed through many villages with small mud and timber houses, with livestock tethered out the front and round haystacks. Water buffalo, ox, and goats sat by the roadside. Fetid rank standing water lay between areas of dwellings, black and stagnant. Children played by the quiet dusty road. You wondered how people weren’t ill all the time living in these conditions. We felt like we were cycling through people’s personal space as they washed and cleaned their teeth at the standpipe pump or the river, but there was no personal space here, everyone lived together in a close way.

Many wide sandy rivers with no bridges had to be crossed. We pushed the bike through deep sand then waded through the water in bare feet trying to locate the shallowest route.

It was a long haul, 56 miles, 11 hours, on the rough trail, but at least it was flat, and there was always something to look at. A lot of people were about, going about their day in the fields, driving their Ox cart laden with sacks or crops, milking the water buffalo, brightly dressed women washing clothes and pans in dirty water, sawing wood and sweeping compacted mud outside their houses with spindly hand brushes.

The women’s sarees had become more beautiful and multi coloured to include more colours like orange and purple. Kids playing cricket enthusiastically on patches of wasteland. 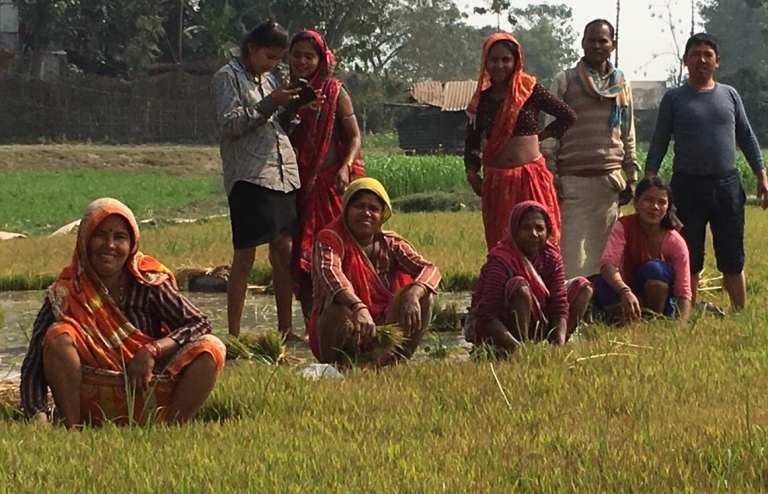 A man asks us ” have you been sent by the government, no” we reply, “we are tourists”, with much look of amazement from the crowd that had gathered. Women made dung patties and dried them in stacks to fuel their stoves. We passed large simple scales on the outside of villages where heavy jute sacks of unthreshed rice were being weighed before they were sold.

There were jolly exchanges as we cycled past and plenty of good conversations with young people about the political situation and how corruption in the government is holding Nepal back. They spoke freely how foreign aid is being pocketed by selfish individuals in the government.

We had our first bike break down, the tension bolt on the sadle sheared off, meaning the leather part was not attached at the front. It was a serious problem and needed an 8mm bolt to fashion a repair. We weren’t carrying bolts this large and this seemed to not be available in Nepal. A bike mechanic, from a basic fold out stall, carrying a few battered rusty spare parts , said he would send someone to a shop in India and he’ll be back in 10 minutes. He said “see that tree over there, that is India.” We had a chai and waited. 20 mins later, amazingly the guy came back with exactly what we needed, at a cost of 30p. We fitted it with the help of the bike mechanic and we were soon on our way

As we moved east it became less poor, the houses more spaced out and the look was much less medieval. Gradually we saw more timber houses on stilts, that looked slightly Far Eastern.

We stopped to chat with some brightly dressed ladies who were digging up rice seedlings to be planted in the rice paddies. Vibrant green plants in the flooded land, contrasting with the reds and oranges of the women’s clothing. 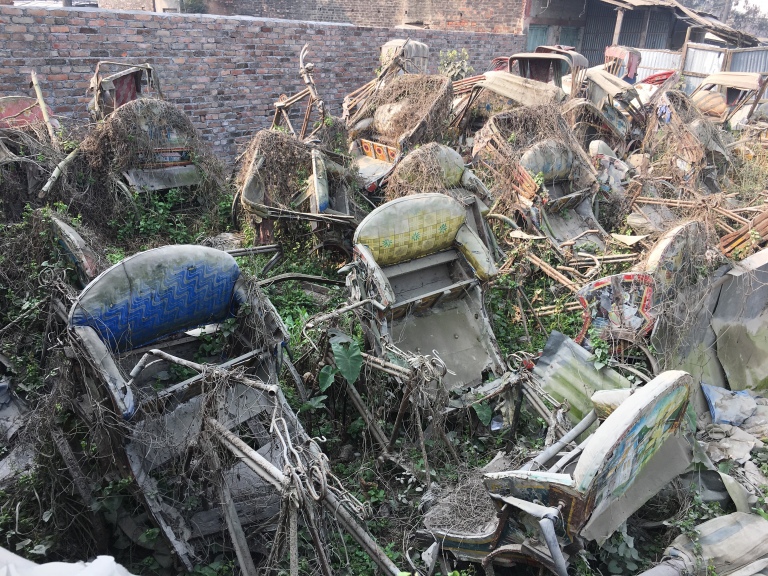 At our lunch noodle stop we had a great chat with a young guy who had tried unsuccessfully to get into the Gurkhas a couple of times, and instead opted to work in Iraq and Dubai in security. We have often had these conversations with people that have worked abroad and they have to pay the agency in Kathmandu $3000 to get the visa and job! He was a nice friendly guy, and has now set up a pig farm in his homeland. 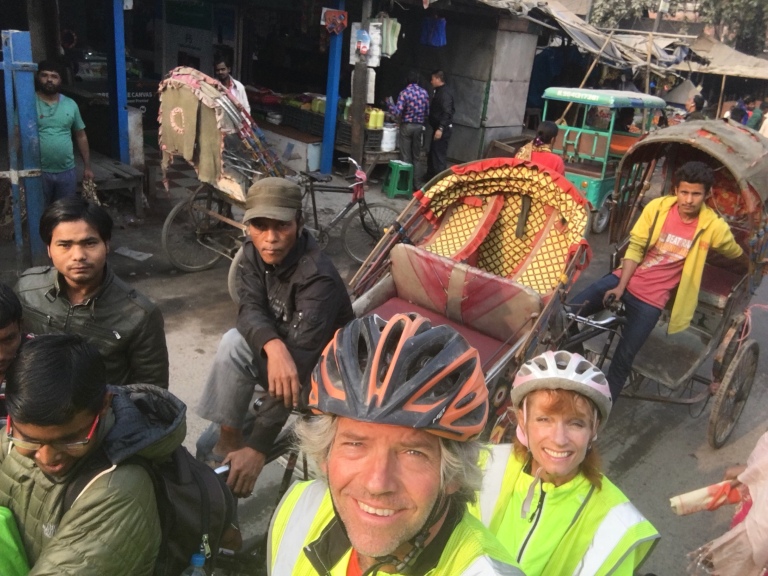 We left Nepal in a similar way to our arrival by crossing a long bridge spanning a river. Small quiet lanes led through tea gardens the 30 miles through India to Bangladesh.

Border formalities involved many selfies with the guards, drinking tea and talking about our children and theirs. 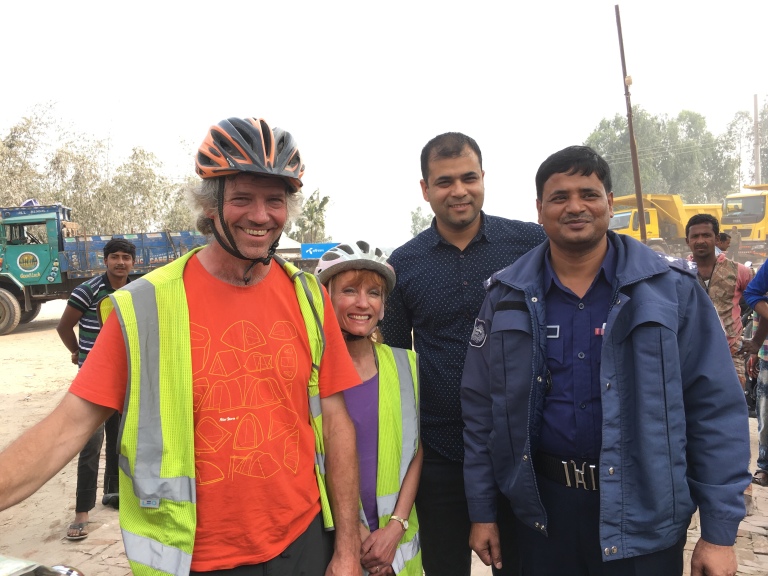 Hundreds of lorries queued at the Bangladesh border carrying rock from Himalayan rivers. A mixture of rough trucks heavily loaded stood in long lines. Eventually we entered Bangladesh through a gate in a razor wire fence. 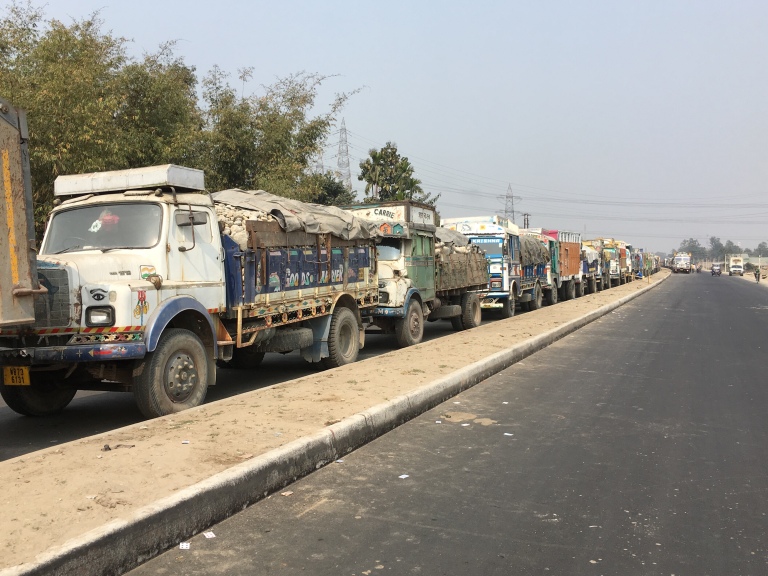