After the haul to Sandhikarkha we decided to have a rest day, as the next section to Ridi Bazaar looked similarly tough. The town was alive with activity, women, children, and families, colourfully dressed heading to the annual festival by the river. A huge market, fun fair and music stage, was crowded with people enjoying themselves. Kids hassling their parents to buy tacky goods and candy floss. 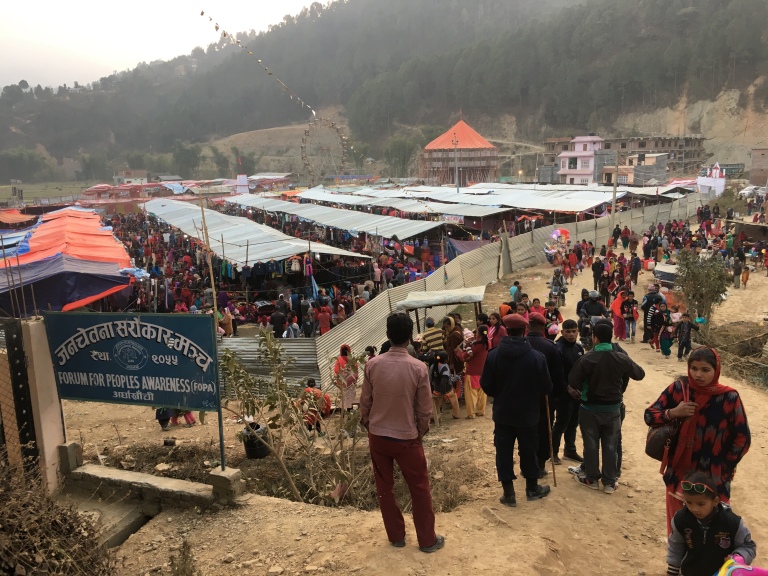 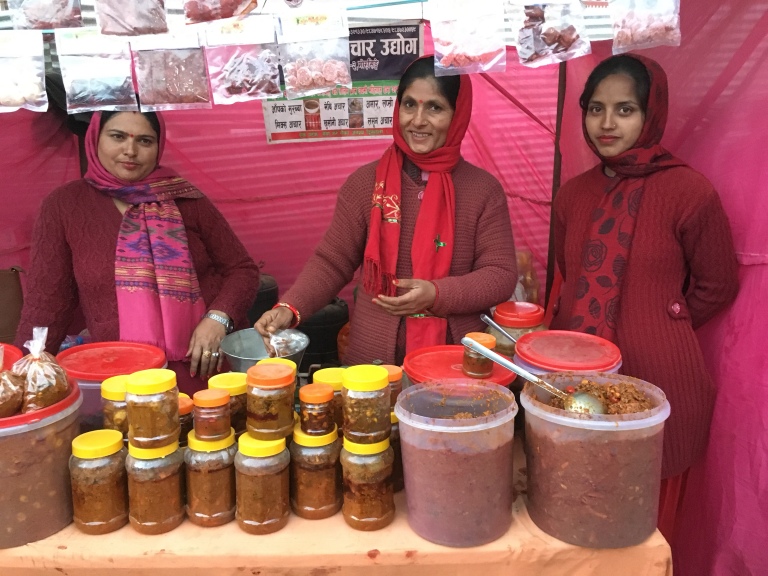 Early next morning we started the climb out of Sandhikarkha 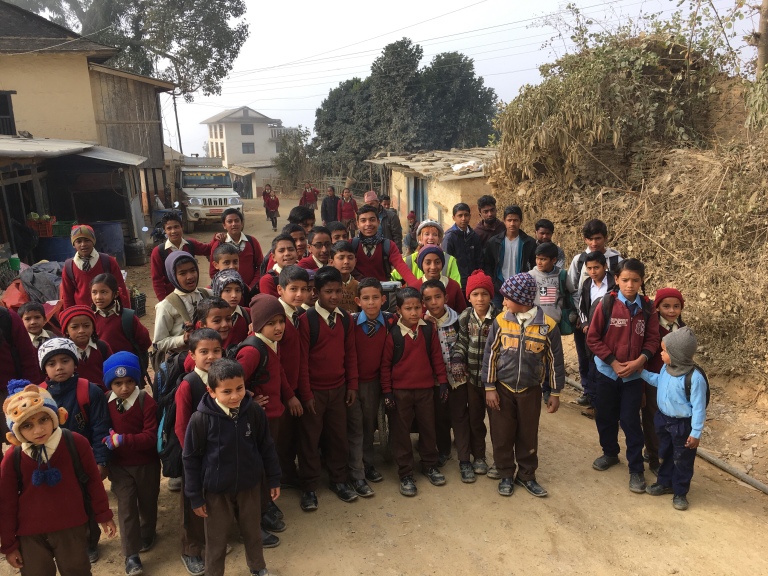 School children were running alongside us, laughing and chatting. A few at first then quite a crowd. All in their neat burgundy school uniforms. They chatted away to us about cricket, health issues, politics in Nepal, and sensitive subjects like child marriage. It acted as quite a diversion to the long hill we were climbing. They told us that they play cricket on the road as there is no flat land. 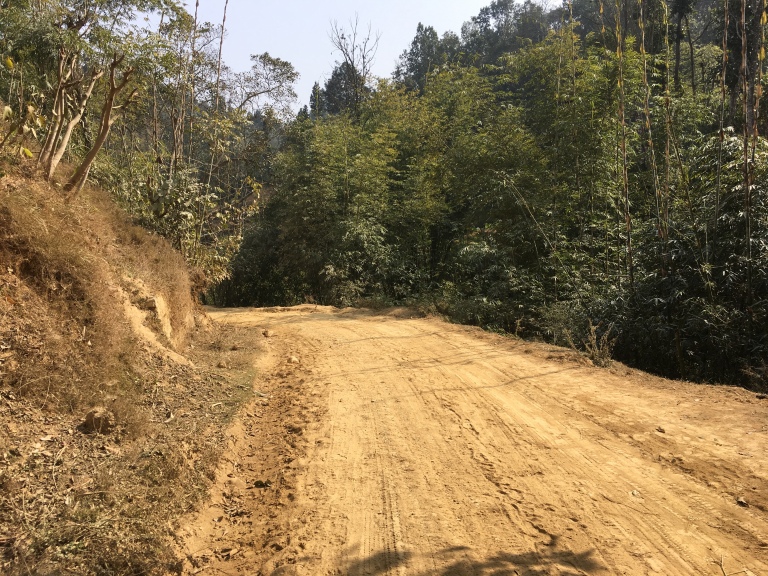 The vegetation was lush with tall thick bamboo plants leaning over the road. Gracefully slender suspension bridges spanned the river below. 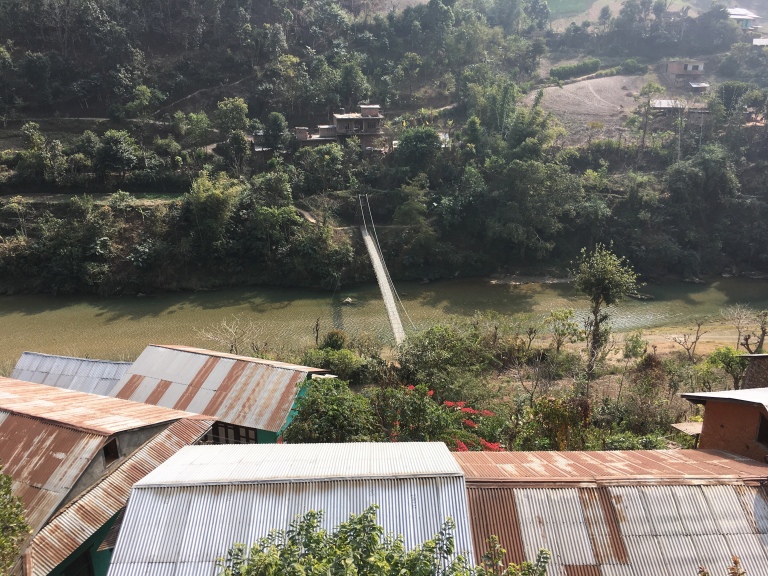 Sections of road had been removed as bridges were being rebuilt. Buses and lorries were being diverted to drive along the river. Luckily we could pick a way through the road works pushing our bike down to stream beds where bridges were missing. 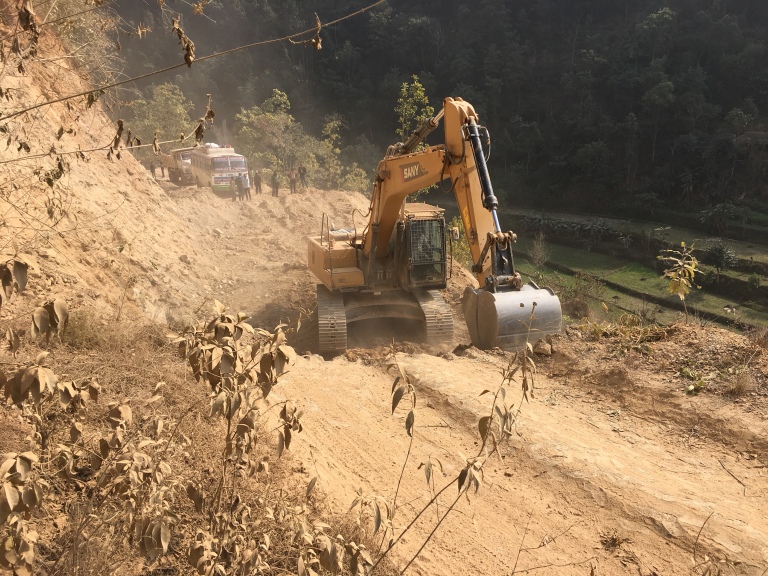 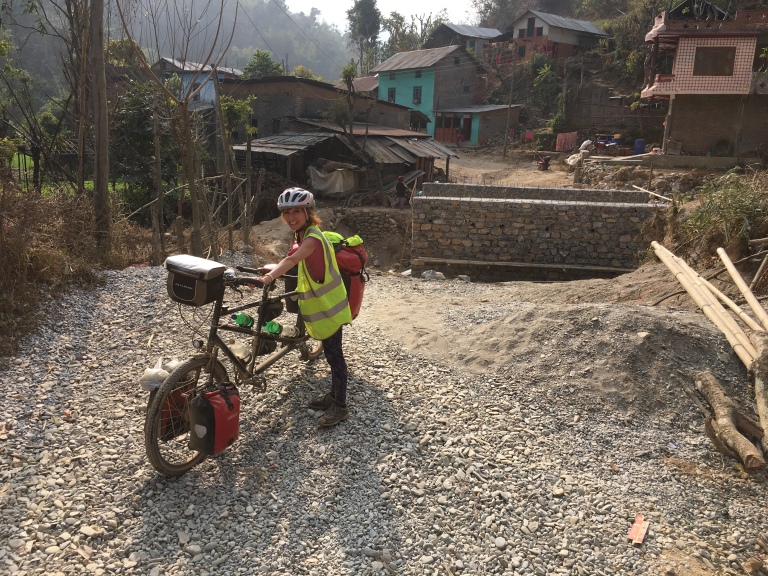 The route to Ridi hadn’t been as bad as we thought and we arrived in good time at a friendly lodge ran by a mum and a son. You feel part of the family when you stay at these places and often eat simple dhal baat for supper with them. Along with the people at food stops you feel well looked after by these people, it’s like they want to mother us. Maybe they feel sorry for us and the physical challenge we have set ourselves. On arrival we realised we had a puncture and the rear brakes were making a noise, so on the steps outside the lodge on the edge of the bustling central square of the town we fixed the brakes and mended the puncture. The town’s activity, buses coming and going, people shopping, brightly painted lorries delivering goods, went on around us. School kids watched very attentively. 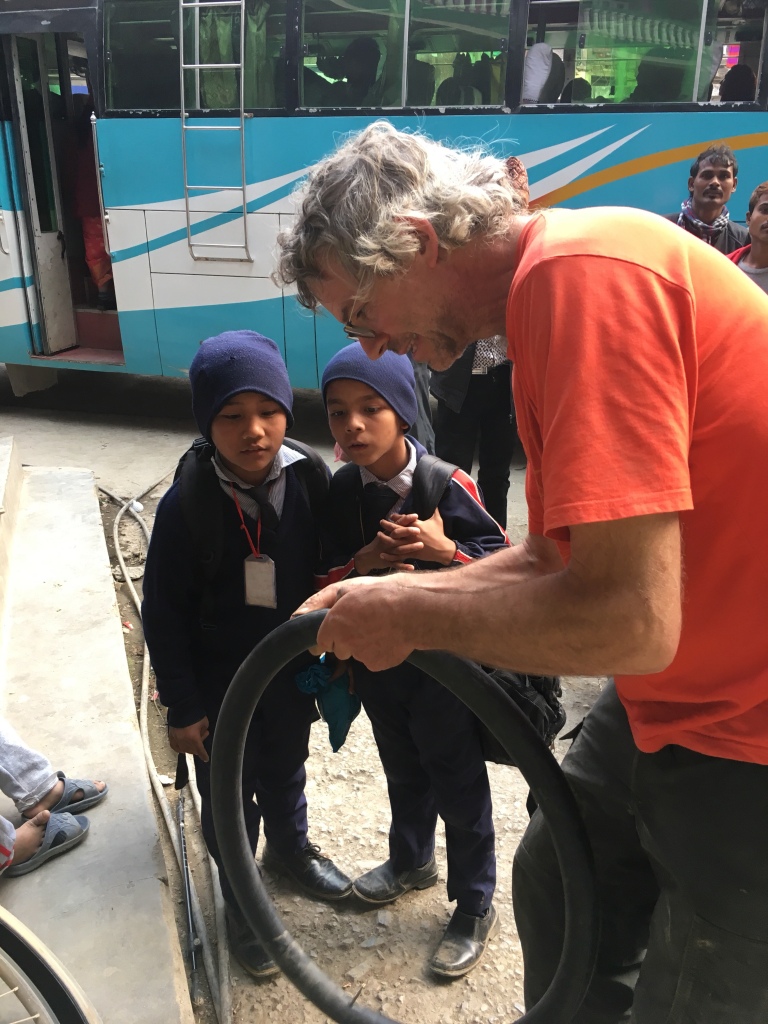 As the rough road cycling to Ridi had been much more manageable, the road had more compacted mud, rather than the dreaded powder filled deep ruts, and the gradient was less, we set off on a rough road following the Kali Gandaki River with some confidence. 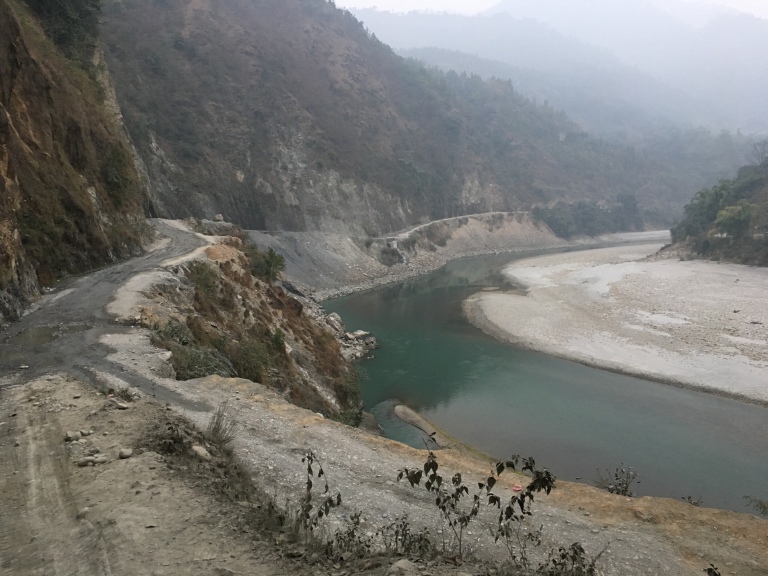 The route started climbing and not following the main river valley, but following a tributary. The road steepened, the valley narrowed, the surface became rougher and rocky. The road hung onto the gorge side in a spectacular fashion with the turquoise turbulent river below. We started to struggle and were pushing for long sections. Streams crossed the rocky track and waterfalls fell from the steep mountain sides. The scenery was harsh, rugged and on a vast scale. Progress was slow, fewer people were about, and we were entering a more remote area. We new we still had a 2000 feet climb after we crossed the river some way off. We were becoming exhausted, giving every bit of strength we had to get the 65kg loaded bike up this mountain track. 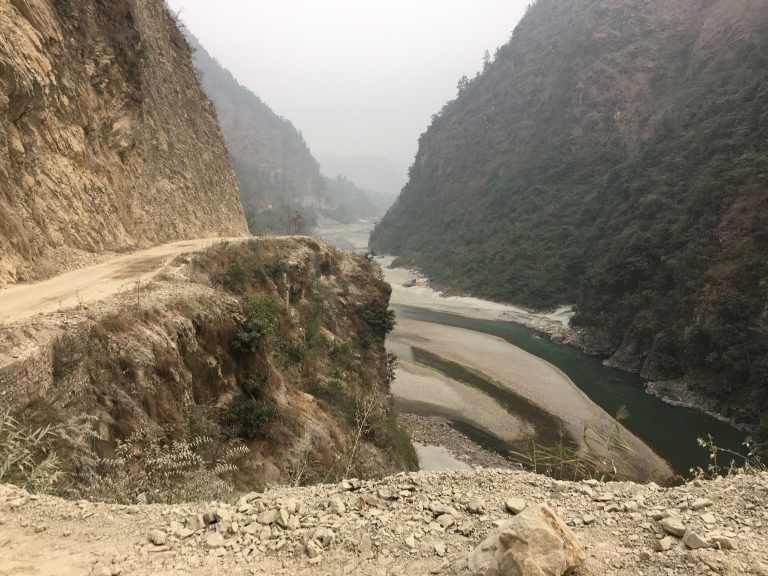 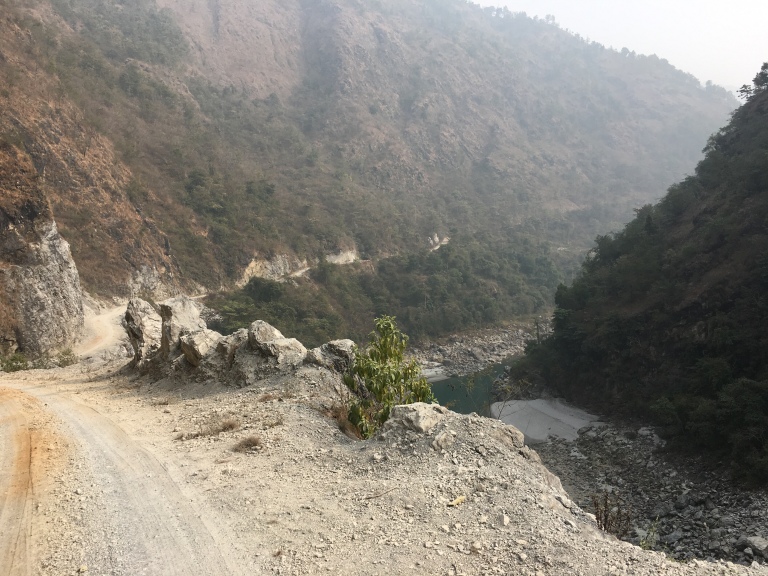 By some miracle when we arrived at the river crossing, it was a hydroelectric dam and a tarmac road, presumably put in when they built the dam, leading up the hill. It was still a hard steep slog up the hill, as we were really worn out by the day. 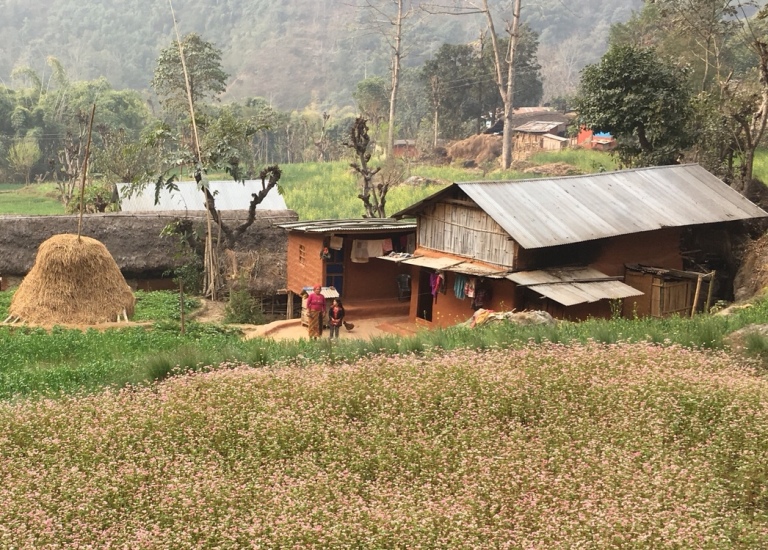 When we got to Galyang and luckily found somewhere to stay we needed to have a rethink on rough road cycling. We decided to abandon following the Kali Gandaki and head to Pokhara on the tarmac road which actually wasn’t a busy road at all. From there we would find another route to Kathmandu.