After a night of illness, probably caused by the day’s before lunch, we were left weak and wobbly and had to stay put in Pithoragarh for a day, and decided to sort out a jeep to take us to Tanakpur near the Nepalese border the next day. We felt really rough all day, sleeping a lot and struggling to walk round town. We had been so strong the day before pedalling up the hill from Jhulaghat without too much difficulty. Now we were struck down. In the night there was a huge storm and we woke to the the hills around the town covered in snow.

Our jeep turned up and we loaded the tandem into the back. It was an Indian Whillys jeep, proper open sided and canvas top, right out of the 1950s. A sign painted on the back read “All is fine” .

Our driver was someone of a few words but seemed kindly. We picked up his friend and co driver, a young chatty lad, called Akil. He told us he was firstly a state level boxer, and then a driver. He proudly told us that he didn’t have a driving licence. We snaked our way out of the town, and stopped at a temple to have the jeep and drivers blessed. Red and white dye were put on foreheads and the front of the jeep, and joss sticks installed on the dashboard. 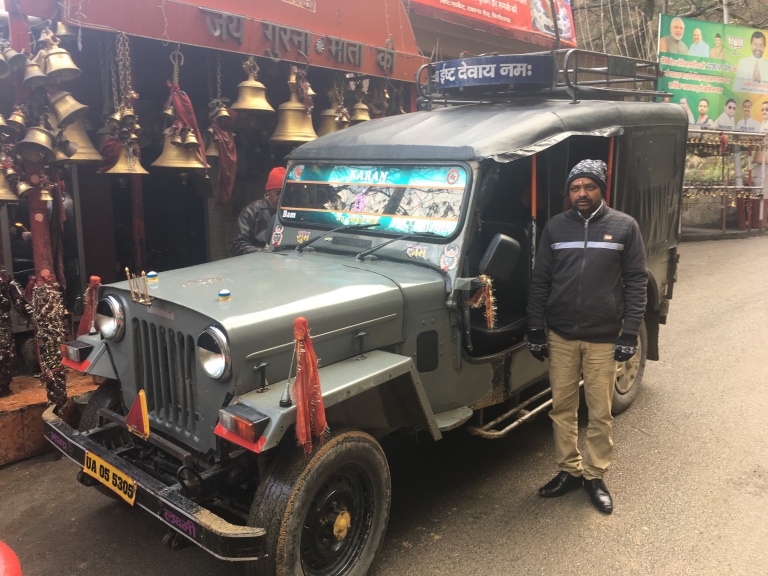 We descended to a fast flowing river before climbing to a great height again, many sections of road had been turned to mud where they had been working on it, which had been mixed with the heavy rain and snow in the night. The jeep slid around the mountain road and we thought about how safe were those bald front tyres. Thank goodness we had had the temple visit. There were many parts blocked that we had to wait at while they dug the road out. We thought we were lucky not cycling this road, it would have been hard. The scenery was dramatic and progress was slow. The older driver became agitated by the hardship of the journey and tried to sell our fare to other jeeps so he could dump us in the mountains and return home. We had to put our foot down in a friendly fashion and he continued reluctantly on our way.

We pushed on, crossing the mountains and stopping at the road blocks. We also stopped to have some other piece of temple accessory re attached to the bonnet.

Alkil, was more relaxed with the outcome of taking us all the to Tanakpur, because he spent nearly every minute when he was not driving trying to find us on Facebook, which he achieved near to the end of the journey. His mission was accomplished and he felt happy with the day.

Eventually the river and its valley widened to a broad boulder and sand river bead. The mountains diminished in scale and we gradually came out onto the flatter green land at the bottom of the Himalayas.

There was more chaos in the towns again and the road was full of people, bikes, buffalo carts and rickshaws. It felt alien to us after the mountains where everything was slow because if the nature of the landscape.

Early the next morning we set off to the border at Banbassa. It felt good to be cycling again. It was a sleepy quiet border post and we approached the bridge to cross the river into Nepal as the sun was rising. The long narrow bridge made from cast iron on stone buttresses took us across sluice gates that controlled irrigation canals. The bridge girders had Frodingham iron and steel, Great Britain, embossed in them.

The Nepalese side of the border was very jolly and and we posed for pictures with the guards as they said welcome to Nepal.

After the mountains, the flat road seemed easy and we managed 90 miles in the day which took us to Chisapani. 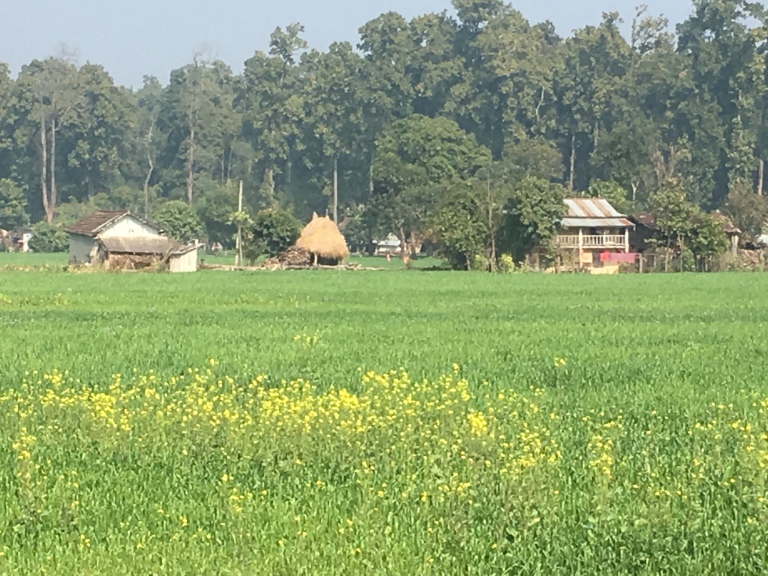 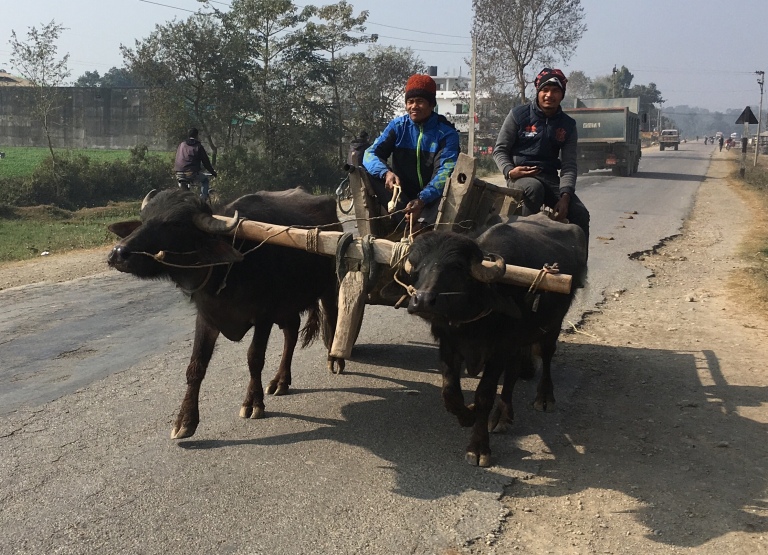 It was nice being in a new country noticing subtle differences in life and culture. It’s poorer, and there are more mud and timber villages set in the cultivated green flat land. There were large gatherings of cycle labourers waiting for work, their bikes kitted out with crude sacking panniers in order to carry ridiculously heavy loads 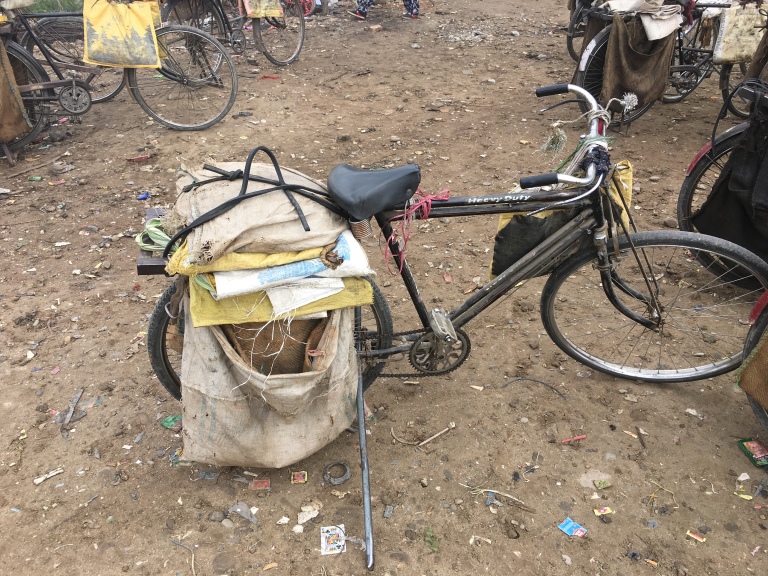 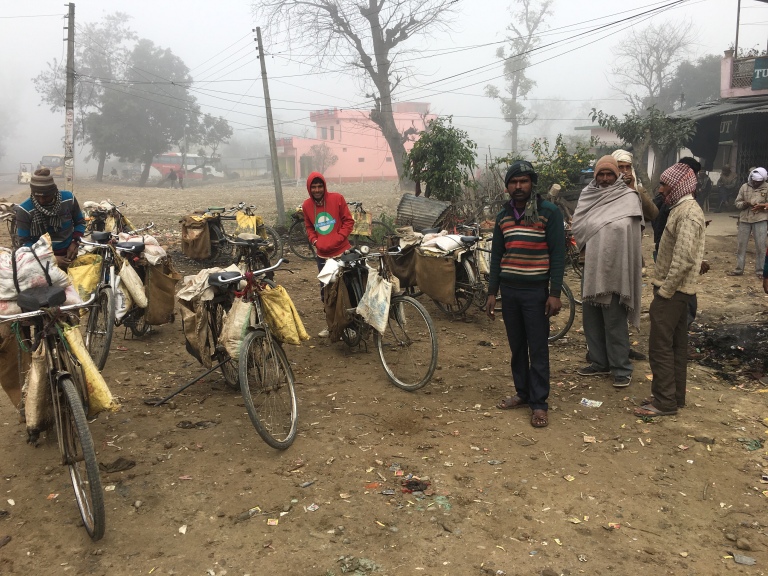 Later in the day we met our first other cycle tourists, two Irish, and two Nepalese cycling the length of Nepal

Raising money for a school that was destroyed in the earthquake. It was lovely stopping for a chat with them. Doc one of the Irish guys had been in Nepal for 10 years and was married to a Nepalese and had two children.

3 thoughts on “Pithoragarh to Chisapani ,”