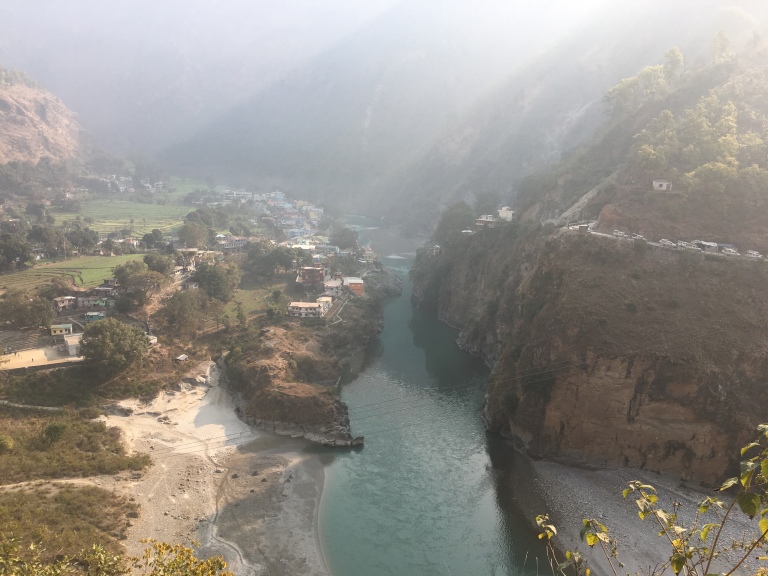 We felt we were heading into the unknown as we set off down the mountains as the sun was rising over the misty landscape. The border with Nepal was 20 miles down 3600 feet. We passed several military camps and there was a feeling we were heading to frontier.

The road was quiet and the countryside seemed less inhabited.

As we came over a col we spotted the glistening of the river in the mist that marks the border with Nepal. Free wheeling down and down the windy mountain road, we had our first sight of the delicate suspension bridge that leads across the narrow gorge connecting India to Nepal. It was an impressive sight.

We arrived at the border town of Jhulaghat and people directed us through narrow alleyways in the colourful market to Nepal. Sometimes we had to carry the bike down steps and the passages were only just wide enough for us to pass.

We arrived at the bridge, clutching our passports and an email from the Nepalese Embassy in London, stating we were allowed to enter Nepal by this route. We were met by a border guard. “You are not allowed to cross” he said. Young women soldiers carrying guns passed us. We spent time chatting with the guard hoping there would be a way, but there was no change in his decision. 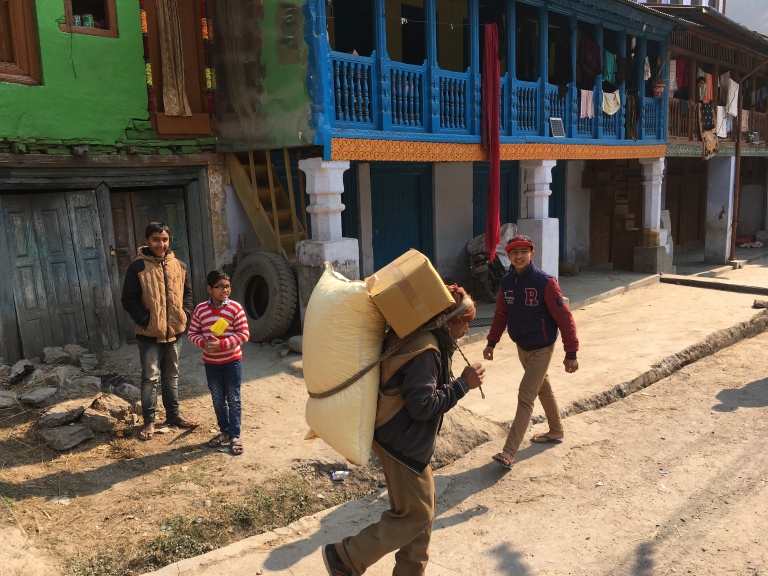 We were really disappointed that we couldn’t continue on our journey in the Nepal Himalayas and were not looking forward to the climb back to Pithoragarh.

We stopped in Jhulaghat for some food. It was a nice market town and we chatted with some students about how great India is developing and what great opportunities there are for young people with the present governments policies. They did not aspire to going to Europe, they saw there future in India being a lot better.

We couldn’t put it off any longer and we had to head back up the hill which took us 6 hours.

We still felt it had been a good day with experiences and adventure.

7 thoughts on “Heading to the Nepalese border at Jhulaghat, 22 Jan, 45 miles”