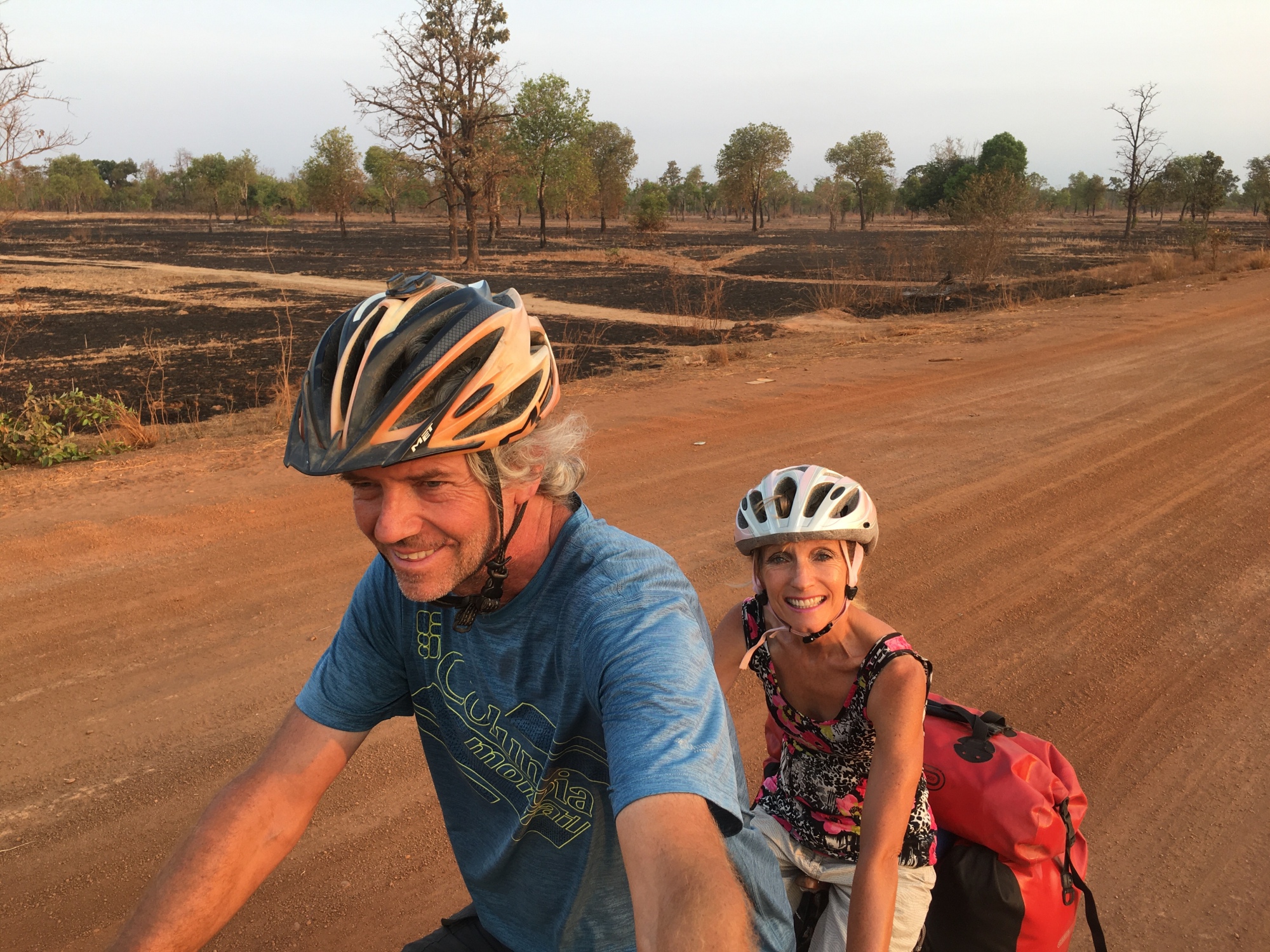 It was good to be back following the Mekong through the the last piece of South Laos before crossing into Cambodia.

The river was broad, a huge expanse of glistening water, sluggishly moving towards the South China Sea, sparkling in the hot sun.

We visit Wat Phou, a Khmer temple complex dating back to the sixth century. The ancient stone structures, set back from the Mekong with an impressive mountainous backdrop, tumbledown and distorted by time they have stood. The surreal tranquil elevated position overlooking the Mekong in the distance made it special. These impressive Khmer ruins marked a kind of prelude to our arrival in Cambodia.

The river soon changes its character, islands appear, a few at first, the river is split, then it turns into an archipelago choking up the waterway. The river becomes alive with small boats, people fishing, and villages on the riverbanks surrounded by palm trees, giving it a very tropical feel. Tall thick bamboo hangs over the blue green water. It’s hot and the air feels thick.

We go from island to island on small ferries and along little paths in this tropical heaven. There are bright green rice fields and water buffalo again. Tranquil villages with wooden houses on stilts are here and there. Sleepy people lying in hammocks hung below their houses call out and wave from the shade. Some are mending fishing nets, tiny boats scurried about, and others worked the small plots of land. It was a pleasing setting of the Mekong, islands and life going on at a slow pace.

Our last island hop to do and our boatman has had a considerable amount of whiskey, but his clumsy movements and sway become manageable once he is at the helm. It’s a busy channel with laden long tail boats returning from market. He manoeuvres the boat to come alongside a small pontoon trying to avoid a chunky near naked western lady swimming. We are arriving at a backpacker haunt. A clash between the blissful rural scene, and unsympathetic tourism. A guy fishing, a lady making noodle soup, people returning from a market on another island with fruit and vegetables, and a large breasted backpacker sunbathing on their little harbour. Two worlds collide. It felt uncomfortable and we were glad to cycle away from the enclave and head on further into the archipelago.

The Mekong crashes over large waterfalls as it drops over a huge ledge and disappears into Cambodia.

Once in Cambodia we are a little distance from the river and the landscape becomes barren and flat, industrial scale farming of cashews, cassava and rubber, like we haven’t seen before. We push on and it’s a nice surprise that scented China tea is back.

The stilted houses are mainly wooden, even the smart ones, and they have huge metal canopies, almost like a filling station forecourt, out the front creating large shaded areas. The stilts are tall and the prominent stairs positioned at the front are very elaborate , sometimes concrete, sweeping and intricately tiled, very different from the ladder type in Laos.

Once more we are back to the Mekong. Villages green rice fields, palm trees, bliss.

Towns have large markets. There is more hustle and bustle, commerce going on everywhere. It feels more Asian again. Such huge variety of produce and food. So many stalls and cuisine. Brightly coloured weird looking fruit, metal steamers of dumplings, pots bubbling, offal barbecued, and heaps of noodles.

The most heavily loaded elaborate motorbike and trailer mobile shops pass us on the road. Cambodia is really open for business. The bike rider of these mobile shops is completely shaded by the mass produce hanging from his trailer.

Cambodia certainly had its own style and identity. They love chunky wooden furniture often heavily carved.

We headed down through the country towards the border with Vietnam, leaving the Mekong again while it flowed to Phnom Phen, passing through villages drying peppers and sweet corn. Fields of tobacco were there too. Tall tobacco dryers dotted the villages and women spread out the chopped up leaves on tarpaulins.

Cornavirus was starting to dominate our thoughts and we had a flight home from Saigon but travel into Vietnam was becoming troubled. We were very lucky to get in with some illogical long winded events at the border where we thought we were doomed but then miraculously our passports were stamped reluctantly. The virus and developments in Europe and the attitude in Vietnam was causing a sting to the end of our journey. Things weren’t as relaxed and we wanted to get back home now.

We eventually reached the South China Sea and it was good to conclude our journey, but also just to think back, Calcutta in January, Bangladesh, the paddle steamer with the orange bearded captain, colliding with the ship in fog, Mizoram and the empowered people, the remote border into Burma, Bagan and ballooning, Laos and the Mekong, Cambodia with it’s amazing markets, but most of all the countless lovely smiling people that have waved and called out, they made our days and hopefully we enlivened theirs.

3 thoughts on “To the South China Sea”