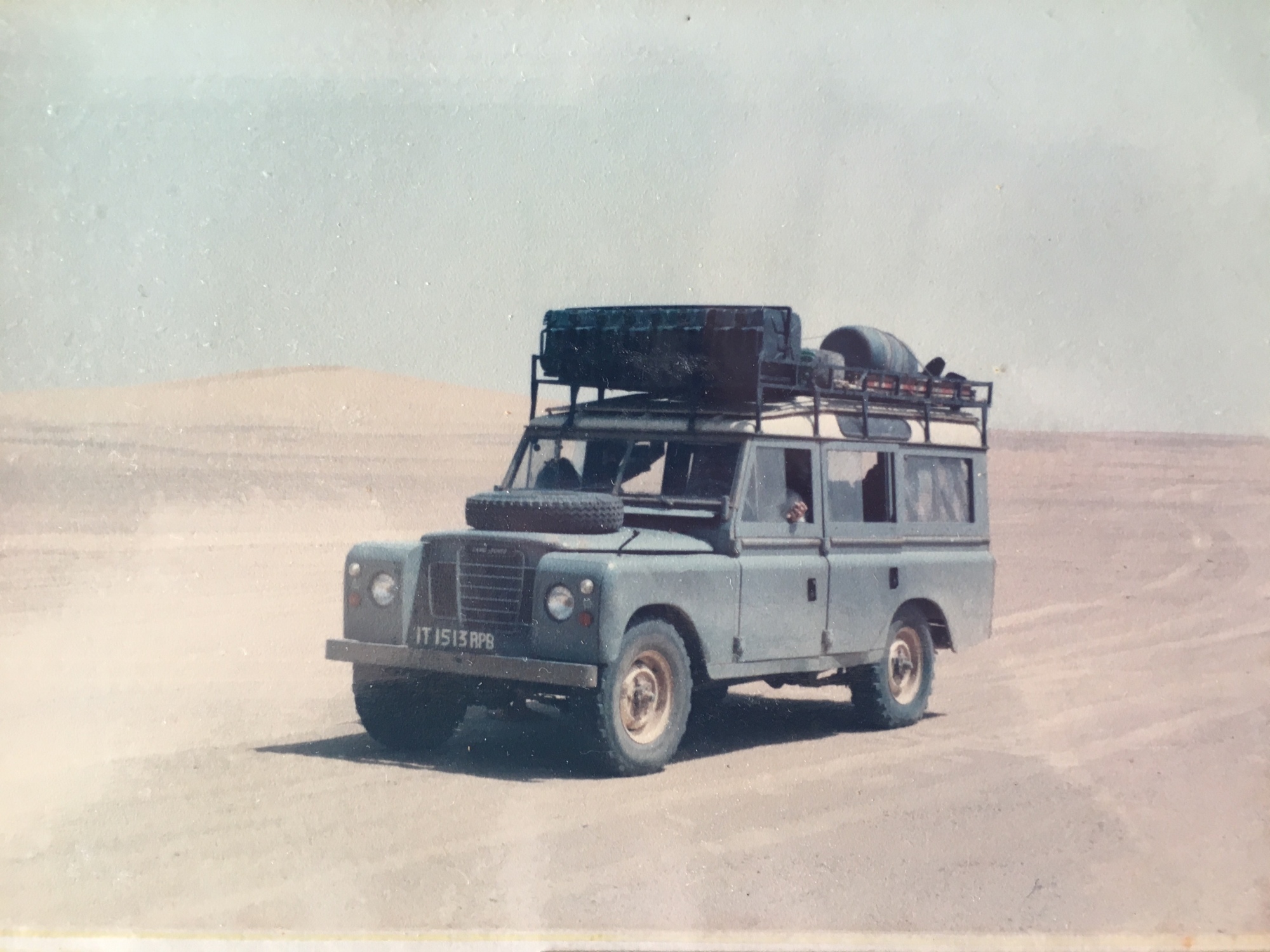 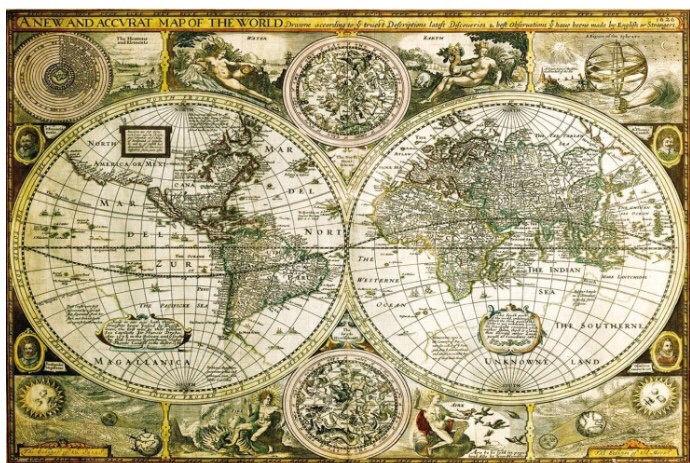 A historic map of the world hung on my attic bedroom wall. At nine years old I was fascinated by the world out there, the vast oceans that separated the distant lands that had been explored by pioneers back in time. I had always loved maps from an early age, and not much has changed, I still love spending hours poring over the spread out sheets, following the rivers, coasts and mountains. The flat coloured sheets come alive with information, building a picture in my head, of the faraway places.

From a young age I made several inspirational visits to the Royal Geographical Society in London attending talks given by bearded explorers, mountaineers and adventures, that had returned from expeditions to the Himalayas, crossed oceans in historic ships, and followed rivers deep into Africa. The imposing nineteenth century building in Kensington with its tall windows, heavy arched door, long high ceilinged corridors with polished floorboards filling the air with the smell of tung oil, was a fitting place for explorers to wander. The grand rooms housed huge old globes, large heavy framed portraits of well dressed, moustached, serious looking explorers from a bygone time looked down, Gino Watkin’s slender seal skinned Eskimo kayak sat on some simple trestles, a monument to his ill fated polar exploits, and Livingstone’s desk that went with him on his African explorations for writing his memoirs sat in an alcove. Lectures about exploration with beautiful slides showing craggy snow capped Himalayan peaks set against deep blue sky, and wooden ships sailing across ugly rough seas made for very interesting visits through my childhood and onto the time I was at University. I enjoyed sitting in the map rooms and reading old journals from expeditions of the past.

As a young child we lived in a picturesque stone farmhouse in Wiltshire set in a large wild garden. It was a kids dream with its small overgrown wood, dark damp cellar, and my bedroom at the top of the house in the attic. Countryside and a stream were nearby, so many childhood memories of the hours and days that were lost messing about there, like there were no restrictions in this rural idol.

At the age of 10, it was a huge wrench when my Dad’s job changed and it meant moving to Surrey, a leafy commuter place. We were all very sad leaving the village setting and the lovely rambling home with its worn flagstone floors.

However his new job meant the opportunity to travel the world, and although there was some hardship for me attending boarding school, this was an exciting time ahead.

In the mid 1970s we were off to Dubai which was rather different to how it is today. Dhows bound for Iran and Karachi lined the banks of the creek with their lateen rigs stowed above the timber decks. Crews sat in groups drinking tea. Cargo was stacked into every available space. The souk was full of traders and stalls selling all of kinds of things. The air smelt of spice and perfume. The shady alleyways alongside were full of life, people everywhere going about their business. 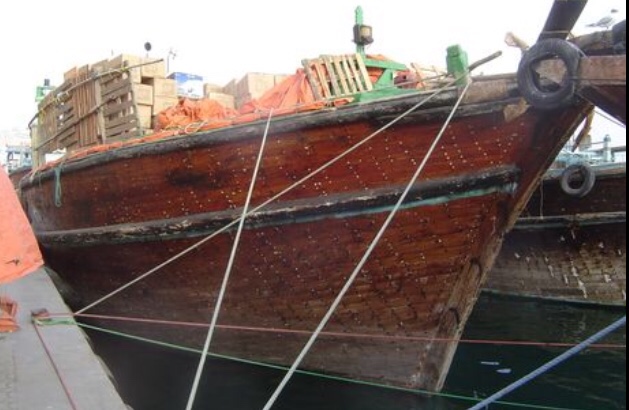 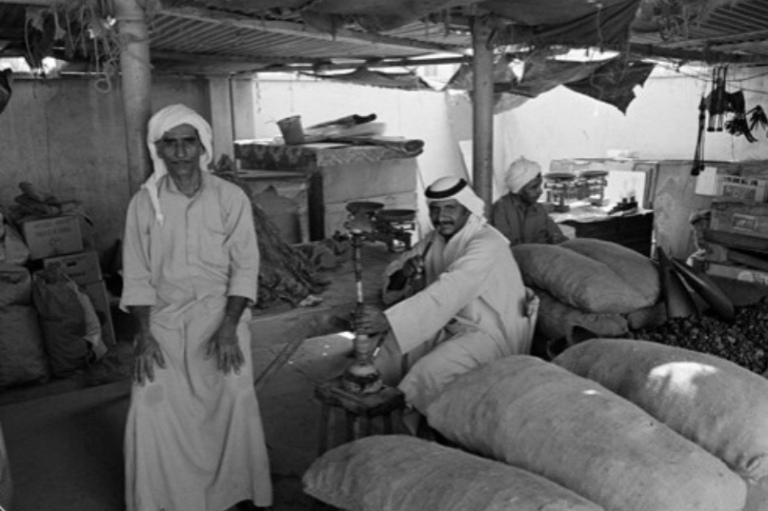 We made several trips across the desert stopping at the oasis town of Hatta where women were washing clothes in the rocky pools of the wadi, and then onto the Gulf of Oman coast, where we camped in traditional canvas tents with thick bamboo poles on the beach. Brightly coloured exotic fish swam around the rocky shore, and large green and red starfish scurried along the sandy sea bed.

Dubai was well suited for short trips to Iran and India. In Iran we ended up drinking sour rancid camels milk, in a low slung black canvas Bedouin tent chatting with the nomadic people that travelled the rugged region near Persepolis. Sitting on a patterned carpet, sipping the murky liquid, showing our appreciation with gestures and smiles, our gratitude for the generosity of these kind people, and the reality that we were all trying not to wretch as we swallowed the sour drink.

A rusting cargo ship took us to Bombay. A few days at sea sleeping on deck under the stars as we passed through the straits of Hormuz into the Arabian Sea. The ship pitched and rolled across the sea that was whipped up into an ugly mess by the end of the monsoon.

Once in India it was onto an overcrowded train heading to Aurangabad, sleeping on slatted wooden benches shared with an impossible number of people. This was an unforgettable introduction to India in 1977. The overwhelming numbers of people, the filth, the smells, the noise, and the frantic frenzied commotion of people. Old, young, babies, entire families, all travelling with masses of bundles of luggage. 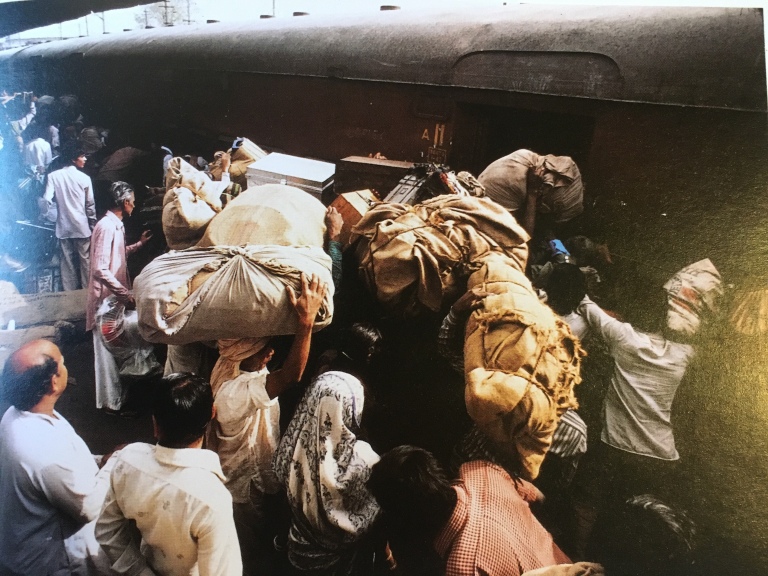 Mum always had this wish to show us the real world. It was often necessary to follow a path that lead into the forest or across the desert to an unknown place, and who knows as we went round just another corner there might be a village with kindly people we could meet. Mum’s necessity to follow those paths with us all in tow was where adventures started. I liked this kind of exploration. The unpredictability of an exploit unfolding just because you were there. You didn’t really know why you were there, but things just happen when you are out there, in some remote land or a bustling market. This approach is really the basis of all our travels. Sometimes Helen and I find ourselves in a situation where things are unfolding. We just say to each other, “let’s just run with this and see what happens” normally an epic story evolves.

The time in Dubai passed and in 1981, when I was 17, we were off to Benin, West Africa. By then I had left boarding school, which was something of a relief and I met Helen at the start of sixth form. None of us had heard of this place. Still with a fascination for maps we consulted an old school atlas. On the breakfast room table in Oxted we looked over the countries of West Africa. We couldn’t help but noticing a red line that lead from Benin, through Niger and Algeria, across the Sahara desert. This played on our minds over the next couple of years and eventually a family expedition to cross it emerged. 

Benin was a great place, warm and friendly people, and definitely the real Africa, which on our recent Africa Bike Ride we were able to revisit and found it still to be the same place. The villages that we had found following those paths into the unknown, and the colourful smiling market ladies with their neat heaps of tomatoes and onions, were still all there. 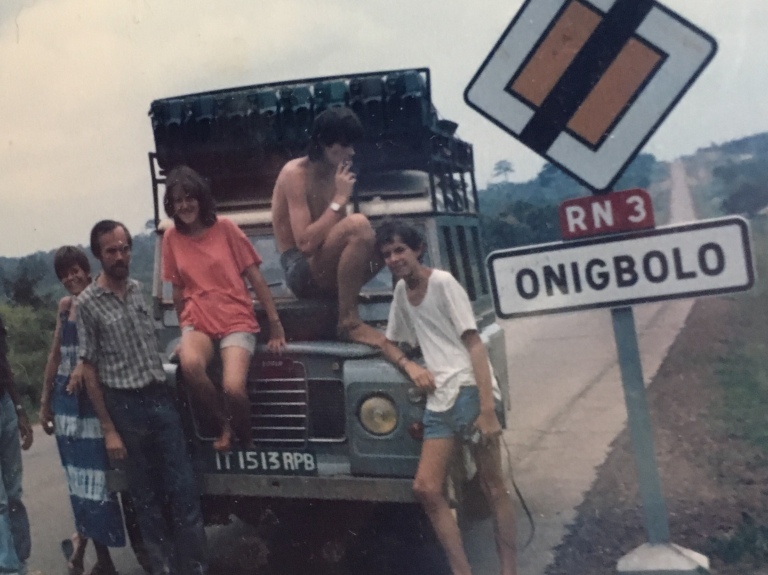 In the summer of 1984 we left Onigbolo, the village where my mum and dad had spent the last three years, on our trans Saharan expedition to return home to England. I was 19 and Simon 18, so we drove too. This trip we were more of a family team all contributing, differing from those earlier exploits.

Filling up with smuggled petrol from Nigeria bought from the King of Ketou, the heavily loaded Land Rover, with the six of us on board rolled out of Onigbolo and headed to the North of Benin to the Niger River crossing. 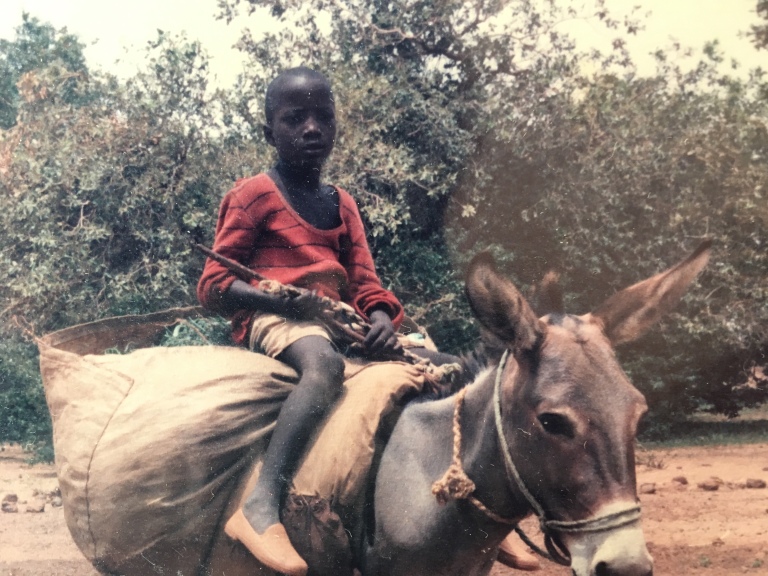 The landscape became more and more arid as savannah gave way to the Sahara Desert, and it was after Agadez where the real remoteness started. It was exciting being on our way, all the planning and preparation, and now we were in the desert. There were several ‘seas of sand’ to be crossed, which we tried to attempt in the early morning in the hope for the surface to have better traction with the dampness from the cooler night.

We struggled and got stuck several times, having to dig our way out. We were alone in a vast silent empty land and needed to carry all our water, fuel and food. The old Land Rover, salvaged from a lifetime of work on the factory site, and rebuilt by Dad for this trip, groaned and strained over the rough terrain. Breakdowns were common and we relied on Dad to bodge up repairs to keep the vehicle going through this inhospitable place. It felt good, the steady progress we were making, sleeping the nights out in the open under the stars of the clear Saharan sky.

A couple of days from Agadez we reached the bleak isolated windswept border post of Assamaka, a tiny oasis of just a few trees, sulphurous water, hundreds of miles from any where. Some grumpy border officials sat in a small building, unhappy with their posting to this harsh hot dusty place that felt like it was at the end of the world, with its rotten egg tasting water. They weren’t in a hurry to get us on our way and insisted that we remain outside the shade of the few trees as they said they were reserved for themselves. I guess they just needed to share the torture of this place with us. 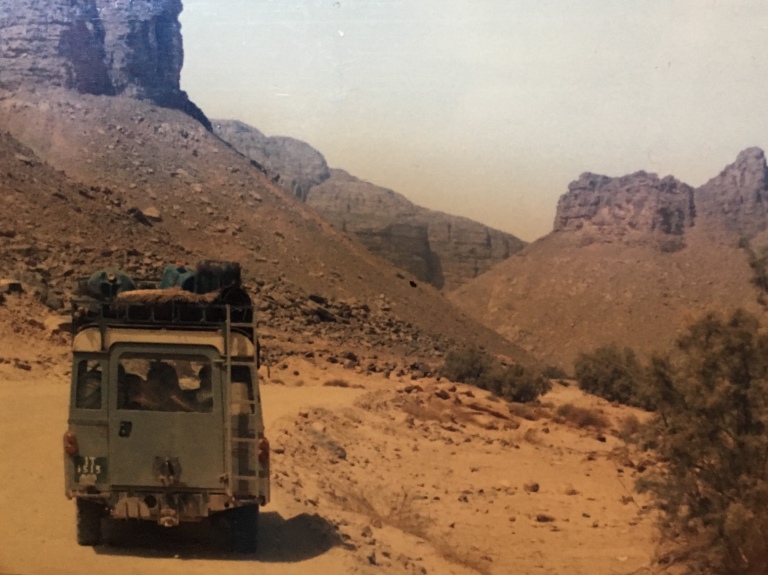 Eventually we were crashing our way through the now rocky desert of south Algeria heading to Tamanrasset in the Ahaggar mountains. The desert had beauty, sculpted layered rock structures, dunes that flowed with the wind and tall arid craggy mountains. It was a harsh place and needed to be respected, but particularly early and late in the day, the dry land comes alive with all shades of warm colours.

The rough roads put the Landrover to test as we shook and rattled our way through Algeria. A brand new tarmac road was a nice sight running alongside the track, and we were quick to join it. Quietness, it was bliss after days of being battered about on the rocky roads. However it wasn’t long before an Army lorry was hurtling towards us. Angry Young Algerian soldiers waving aggressively at us. Better stop we thought. A lot of shouting and confusion that gradually calmed a little, and we realised it was forbidden to drive on the new road. That was only for the army as they had built it. “Follow us” they said, automatic weapons over their backs, “you must come to our camp, the last people who did this were locked up in a shipping container in the desert” it didn’t look good, we were in a remote part of southern Algeria and at the hands of notorious Algerian officials. Back at their camp things relaxed gradually. We kept smiling and engaged in the best conversation about families, offered cigarettes all round, and soon we all became friends and the situation was diffused.

After Tamanrasset the roads gradually improved as we headed north through Algeria, and crossed the stunning Atlas Mountains. It had taken three weeks to cross the desert and arrive at the Mediterranean Sea. The ferry to Europe slipped out of Algiers across the glassy water leaving Africa behind in the distance, as the sky set orange over the Atlas Mountains. 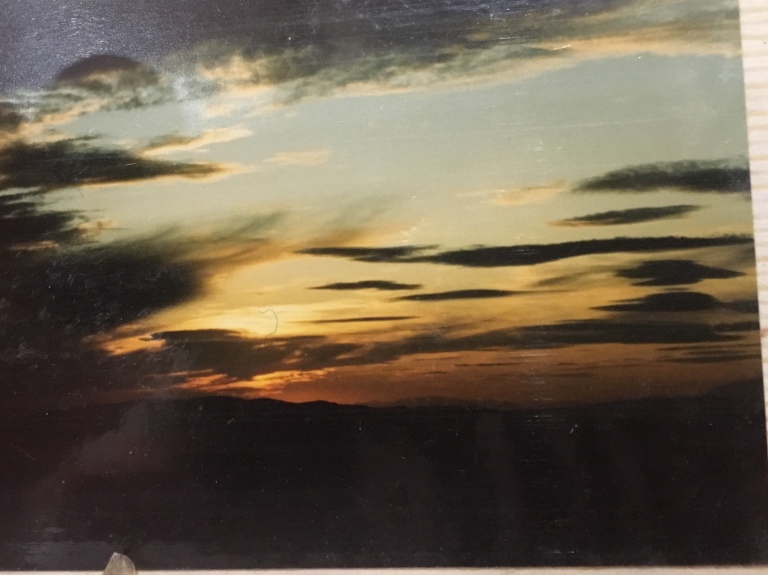 An epic trip, end of an era and time in West Africa, and for me the last adventure with my parents. These trips and experiences shaped the way I looked at the world and were the basis of a lifetime of travel for me.

10 thoughts on “Inspiration,Travel and Adventure from my Early Life Memories.”